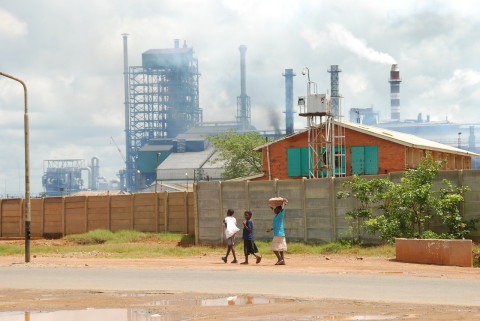 Mufulira District Commissioner (DC) Chanda Kabwe has expressed discontent in the manner crops of the small scale farmers are being withered by alleged Sulphur Dioxide emission from Mopani Copper Mines at Masumba farming block of his area.

This follow Mr. Kabwe’s visit to Masumba Farming block on Thursday yesterday after receiving complaints from the small scale farmers concerning the alleged Sulphur Dioxide emission-caused withering of their crops.

Mr. Kabwe has disclosed to Qfm in a statement that such a situation at the farming block has also forced the farmers to abandon their fields.

He says such a development is saddening as the affected small scale farmers’livelihood is dependent on farming and that the destruction of their crops by alleged Sulphur Dioxide emissions will mean that they will not have a proper yield.

And The DC has appealed to appealing to Mopani Copper Mines to find ways of reducing its alleged sulphur dioxide emissions according to accepted standards stipulated by the Zambia Environment Management Agency (ZEMA) in order to prevent such occurrences in future.

He has also appealed to the affected farmers that his office in collaboration with officials from the Ministry of Agriculture in the district will carry out their own investigations and ascertain the damage of the crops and see the way forward on the matter.