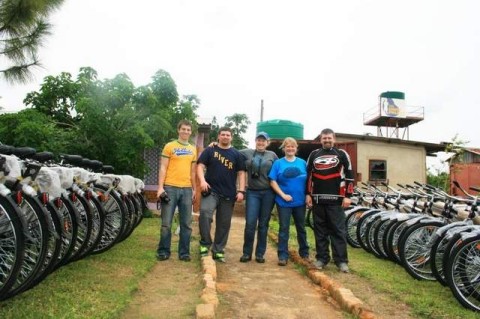 A young member of Lakeshore Baptist Church in Kewaunee spearheaded a missionary project to give bicycles to 60 African Baptist pastors.

Carrie Curtis is an 18-year-old resident of Bellevue who is enrolled at Alaska Bible College. She and her parents, Cherie and Toby, previously lived in Wyoming, where they had met Pastor Chande, a native pastor from Zambia, in 2008.

Chande said during his visit that the pastors in his area needed bicycles because they walked everywhere to preach.

“I heard about this and I wanted to help

to do something about it.

After the Curtis family relocated in the Green Bay area and opened their own bike and kayak shop, Pedal N Paddle in Green Bay, Carrie felt that it was time to accomplish her goals.

“I emailed missionaries and Pastor Chande to see if there was still a need for bikes,” Curtis said. “We then started ‘Faith in Motion: Bicycles for God’ when he confirmed the need.”

Toby Curtis said the big issue for these pastors was that twice per year, they attend a training conference, which they needed to walk to and was held in either Zambia or the Democratic Republic of the Congo. They were also walking to multiple congregations to do their work.

Pastor Ray Anderson of the Lakeshore Baptist Church quickly got involved when the Curtises came to him with their mission.

“Pastor Ray did a lot of research about the different organizations that created the bikes and he managed all of the donations through the church,” Toby Curtis said.

The Curtises ended up working with an organization called World Bicycle Relief, which designed a bike called the Buffalo Bike specifically for the rough African terrain. The bike is developed in Zambia and provides a sustainable transportation.

Carrie said World Bike Relief had a 60-bike minimum order, at $150 each. They did not know how many bikes were needed. That sounded like a large number of bicyckes until Chande emailed them stating that he figured they would need to donate about 60 bikes, 30 for pastors in Zambia and 30 for Congo.

Cherie Curtis said there was some doubt whether the family

would be able to raise enough money to get all 60.

“We did it, with the help of 10 different churches and organizations that wanted to assist us in our goal,” Cherie said.

In total, they were able to raise over $15,000 for 65 bikes, five mechanics tool kits and spare parts.

The Curtises realized that they would need some help in Africa, to be able to teach 60 people basic maintenance on the bikes, so they opened the mission to others in the church.

Ryan Krzeszewski, a Lakeshore Baptist Church member, decided to go along for the ride.

“They talked about it in church, I prayed about it, and then I decided to go,” Krzeszewksi said.

Before the bicycles were presented, the group was able to check each one to make sure they were safe to ride.

The group of five was gone Dec. 28-Jan. 7, and on Jan. 3 they handed out the bikes in Kitwe, Zambia. The only qualification the pastors had before they could get a bike was that they needed to be actively planting new churches throughout their regions.

of each bike is equal to one month of wages for the average resident in Zambia or Congo, and it would essentially take years of saving if a pastor wanted to buy one on his own.

Government officials, community members and about 30 of the pastors were able to attend the ceremony. For those who could not attend, the bikes are being stored until they have time to travel

. To help teach the pastors about the bikes, there were translators speaking French, Swahili and Bema and working with the mission group.

Carrie described the experience of helping these pastors as a blessing.

“It was great to see God’s glory, and I didn’t feel like I was doing it, but that it was me following what God is already doing,” she said.

She said that seeing the faces of the people they were helping was wonderful. The pastors wrote their names on the bikes, locked them up and rode them around as soon as they got them.

“This may be the start of something. I don’t know where it is going to lead us, but I trust that God will guide

Carrie said that they used a quote from Chande during the whole process: “Have faith, trust God, move forward.”

“God kept us in motion, our faith grew in ministry and a bike is in motion when it is used,” Carrie said.

The Lakeshore group has thoughts that there may be more people in Africa in need of a bike, or bibles or more items to be self-sustaining.