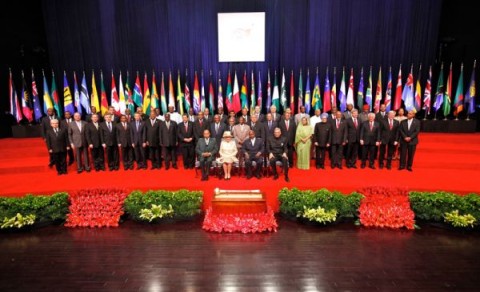 VICE-PRESIDENT Guy Scott has called on investors in the Commonwealth to take advantage of Zambia’s conducive investment climate to invest in the country’s tourism and agriculture sectors.
Dr Scott said when he addressed the ‘Invest in Zambia session’ at the Commonwealth Business Forum here yesterday that Zambia has potential for tourism but that many people are not aware of this.
The Vice-President said business people and tourists talk about countries like Kenya, Zimbabwe, Tanzania and Botswana as tourist destinations but they do not mention Zambia because they associate the country with other things.
“Zambia is also seeking foreign direct investment. We need countries to partner with us in tourism. We have all the wild animals and the Victoria Falls and so on and so forth but we don’t have the sea and the beach holiday possibility,” Dr Scott said.
He said Zambia has magnificent tourism attractions like the Devil’s Pool, which is like a large jacuzzi on the edge of the Victoria Falls, but that the site has not been marketed as a tourist destination.
“Sometimes, we shoot ourselves in the leg, we sent the Devil’s Pool out on the internet and it went viral because we had five million people viewing it but we forgot to mention that it is in Zambia. We have some weaknesses as forward-thinking business people but we need to strengthen that,” Dr Scott said.
He expressed concern that Zambia has always been the backyard to countries like South Africa and Zimbabwe.
“During the years of the Federation of Rhodesia and Nyasaland, all the agriculture and manufacturing was done in Southern Rhodesia, which is now Zimbabwe. Mining of copper and the supply of cheap labour were from Zambia.
“So when the federation broke up and we became independent countries, we had a challenge since that time to build our own capacity in manufacturing, tourism and mining and we have also come to accept that mining is so capital-intensive these days and not really connected to labour,” Dr Scott said.
He said Zambia is looking for development in the agriculture sector, especially mixed farming.
“We’ve had some advantages which have not been of our doing in the region like the problems Zimbabwe is having. We have become the bread basket of the area and if everyone wants maize in a hurry, they come to Zambia,” Dr Scott said.
He said Government is targeting to create a solid Zambian and home-grown manufacturing industry.
“We are the model of growing through direct investment and direct investment really has to be largely foreign because the domestic resource base or savings base is what we are left with.
“We tried out scientific socialism, it turned out not to be so scientific and not very socialist either. We ended up with that model of free market largely foreign investment-driven growth,” Dr Scott said.
Dr Scott later held private talks with Sri Lankan Minister of Economic Development Basil Rajapaksa.