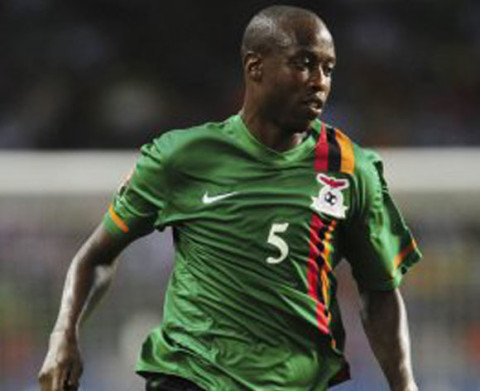 Zimbabwe 0 Zambia 0  –
CHIPOLOPOLO assistant coach Masausto Mwale believes yesterday’s barren draw against Zimbabwe has put Zambia in a better position to qualify for the 2014 African Nations Championship (CHAN) ahead of the final round, return leg in Ndola.
This match, which was initially set for August 11, saw both sides failing to find the back of the net after 90 minutes and head into the return leg on Saturday evenly poised to decide who qualifiers for the CHAN finals to be hosted by South Africa.
Coach Herve Renard had to rush to the airport to catch a flight back to Zambia, leaving Mwale to answer questions from journalists after the two regional rivals battled to a draw in a match that saw the two sides missing good scoring chances.
“I think the boys were equal to the task as they put up a spirited fight to contain the Zimbabweans and I feel we are now in the driving seat and good position to qualify for the finals in South Africa.
“The game was very very tough but we shall work on the loopholes observed during the match to ensure that we win. We shall not underrate our opponents but we shall ensure we get the result to take us to the finals,” an excited Mwale said.
Renard gave striker Evans Kangwa a start teaming up with his Nkana team-mate Festus Mbewe but the two could not find the back of the net.
Even the introduction of Bornwell Mwape for Kangwa and Moses Phiri for Mbewe could do nothing to change the score-line.
Mwape had a great chance to steal the limelight by giving Zambia the win late into stoppage time but his shot was blocked by Zimbabwe defenders for a corner as both sides were left to rue their countless missed efforts.
The match started on a fast note with Zimbabwe dominating play through Tendai Ndoro commanding the midfield and the hosts had a good chance to take the lead but Nelson Mazivisa missed a seater off a Masimba Mambare cross in the 28th minute.
Renard was forced to make an early substitution in the 22nd minute, bringing in Sydney Kalume for Misheck Chaila in a bid to stabilise and bring life into the midfield as the Zimbabwean dominance continued with Ndoro missing several good scoring opportunities for his side.
Zambia started coming back into the game with Bruce Musakanya’s header off a Jimmy Chisenga cross, just going high at goal in the 31st minute and Mbewe had a great chance in the 43rd minute but could only agonisingly watch his header fly over the woodwork.
At the end of the first half, there was nothing to separate the two sides, who went into the break tied 0-0.
The second half saw Renard introducing Mwape for Kangwa just at the start of the half with Zimbabwe coach Ian Gorowa also bringing in Tawanda Muparati for Milton Ncube as both sides went in search of goals.
Erick Chipeta had a good free-kick outside the box to give Zimbabwe a lead but instead blasted the ball wide in the 53rd minute before Nelson Mazivisa missed a glancing header in-front of the Zambian goal.
Mwape gave Zimbabwe defender a difficult time with Peter Moyo blocking his effort in the 70th minute.
Kabaso Chongo tried his trademark free kick in the 77th minute but Zimbabwe goalkeeper Tafadzwa Dube was up to the challenge paring the ball out for a corner avoiding to be beaten like was the case during the COAFA Senior Challenge Cup final that Zambia won 2-0.
Zimbabwe, who had some fair chances in the second half, saw Muparati’s free kick just outside the box going wide in the 79th minute.
Gorowa said Zimbabwe was still in contention of qualifying for the CHAN finals but that he needed to work on his blunt striking force that failed to score a goal from the many chances that were created.
“Zambia is always a tough opponent and I feel we should have won the game save for the blunt striking force. We created a lot of chances and we had possession but just could not find the goal but we shall come with full force to Ndola and ensure we qualify,” Gorowa said.