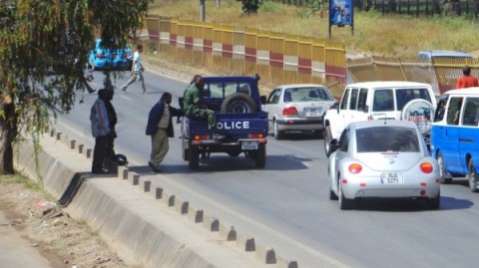 Tweet
COPPERBELT University students have also staged a protest following the protest by their colleagues in Lusaka some days ago, over the removal of fuel and mealie meal subsidies by government.
Earlier today CBU staged a protest they called black Friday as the students dressed in black garments boycotted class and where just roaming around campus as way to show their grievances over the removal of subsidies from the two important commodities.
In an interview Copperbelt University President Oscar Mbewe said the students were aggrieved because the cost of living is becoming expensive every day.
“The students wants government to state clearly the reasons for the removal of the subsidies from mealie meal and fuel, because even the food allowance that we get will be little as compared to the amount of important commodities like mealie meal that we are now buying at kr90, if we as intellectual students can complain how about a marketier who is selling vegetables on the street?” said Mbewe.
He said the protest will continue not until government addresses the situation with major stake holders including students.
Meanwhile UNZA students have continued with their protests this morning students scampered from the monks square in fear of police who disembarked to their campus this morning, corps threw tear gases at students who were throwing stones at the corps.
And UNZASU acting president and vice president Isabel Muray government lacked consultation when they decided to remove the subsidies,
“We want dialogue between government and the people, they should clearly explain why they are removing the subsidies so that even an ordinary Zambian at Soweto market will be able to understand, because even as an intellectual I don’t fully understand why government has done that,” said Muray.
And Evelyn Hone college student’s union Secretary general Bridget Kawanga said individuals should not speak on behalf of hone students about issues they don’t fully understand.
“Let not and individual speak on behalf of  hone students without consulting them on issues they don’t fully understand,” Kawanga said
She however refused to give an official stance of EHCOSU by press time
Yesterday EHCOSU President Inambao Sitwala issued a statement to the media in support of government’s removal of subsidies from mealie meals and fuel which has been received with mixed feelings by his fellow students.