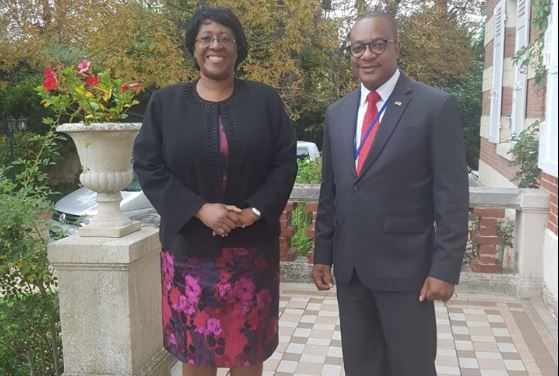 Zambia’s Ambassador to France, Her Excellency Dr. Christine Kaseba-SATA and her family have arrived in Paris to commence her tour of duty.

Dr. Kaseba-SATA takes over from former Ambassador Mr. Humphrey Chibanda who was recalled in January, 2018.

Dr. Kaseba-SATA, a physician and surgeon specialised in gynaecology and obstetrics, served as the First Lady of Zambia from 2011 until the death of her husband, Zambia’s fifth Republican President Mr. Michael Chilufya SATA on October 28, 2014.

Dr. Kaseba-SATA who has vast experience as a health practitioner for over 30 years, has also worked as a consultant, lecturer and was appointed a World Health Organisation Goodwill Ambassador from 2012 to 2014.

The Zambian Mission in France also covers Spain, Portugal, Serbia, Bulgaria, Romania as countries of extra accreditation and the two U.N. bodies UNESCO and the UNWTO.EMBASSY/PERMANENT DELEGATION TO UNESCO