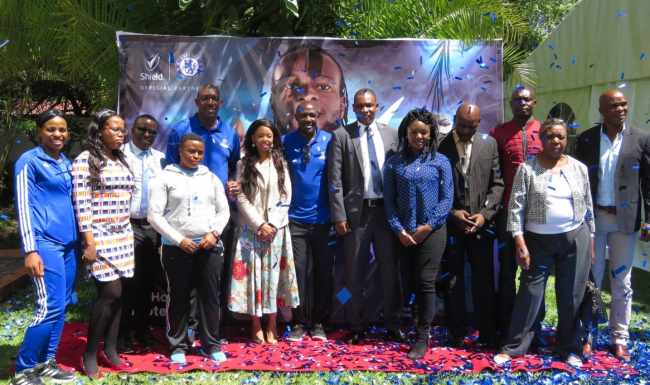 Lusaka, Sunday, 22 July 2018……The 30 youths who were shortlisted from the Kitwe and Lusaka trials for the Shield-Chelsea #BetheNextChampion talent search will enter into a one week football camp where they will get the opportunity to hone their football skills. The boys will be in camp from Tuesday 24 July to 28 July 2018 while training at Fallsway Arena. The final selection will be done the 29th of July where one player will be selected to represent Zambia joining the Africa select team that will play with Chelsea legends in London

While in Camp, the three local coaches, namely Christopher Katongo, Kalililo Kakonje and Kampamba Chintu will take the youths through their football paces.

The local coaches will be joined by three Chelsea coaches who will arrive on Friday 27th July evening and will conduct training sessions and select the winner from Zambia who will join the Africa select team that will play with Chelsea legends in London.

“The boot camp is an important phase of the #Bethenextchampion campaign. Not only is it about picking a representative from Zambia for the Africa XI team, but it is also about inspiring confidence, hard work and teaching dedication to all the participants. This is the embodiment of Shield deodorant.” said Susan Luneta, Shield Brand Manager.

“We want all the players attending the boot camp to leave with the memorable experience of having gained valuable football skills that will take their football aspirations a step further as they continue to pursue their dreams. The camp will also teach the participants to be exemplary members of society as they interact with each other,” Luneta said.

Christopher Katongo, Kalililo Kakonje and Kampamba Chintu have worked for hand in hand with Shield as brand ambassadors to recruit the 30 youngsters who will enter the boot camp.

“This boot camp will be an intensive program that will give the youngsters the training and skills set they will need to impress the Chelsea delegation. We know they already have the talent, this time it will be about building on their raw talents and counselling them on pursuing their goals.” said Christopher Katongo.

The #BeTheNextChampion talent search, a journey which began in April, is a grassroots football initiative that stems from a partnership between Chelsea and Unilever’s Shield brand. The program has had the endorsement of football stakeholders and has been commended for providing a platform for youths to showcase their football talent.

From an overwhelming response of hundreds of entrants that came for trials held in Lusaka and Kitwe, 30 were shortlisted for the boot camp to compete for the one slot to represent Zambia in the Africa XI select team that will fly to London to play with Chelsea legends in September.