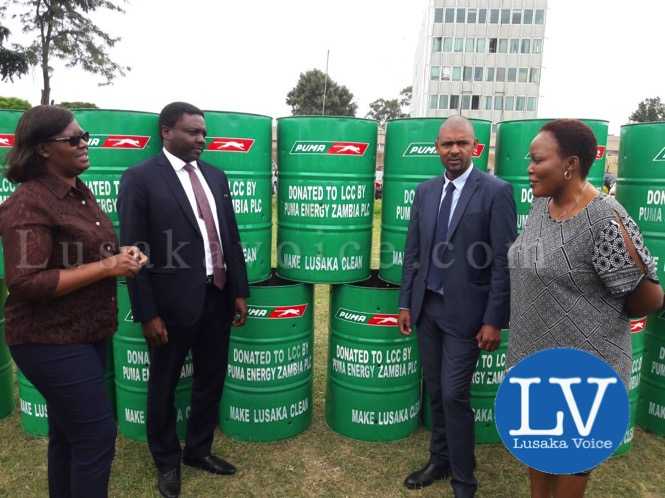 Lusaka, Thursday, 11th January 2018 – Puma Energy Zambia Plc, a leading oil marketer in the country, has today donated 320, 200 litre drums to the Disaster Management & Mitigation Unit (DMMU) in the Office of the Vice President for use by the Lusaka City Council (LCC) to support the council’s Make Lusaka Clean campaign – a public clean up and information campaign aimed at improving the cleanliness and aesthetics of Lusaka by improving waste management. The Puma Energy branded drums will be placed throughout Lusaka to facilitate the reduction of widespread littering and improve waste collection and management. In attendance at the handover ceremony included the Minister in the Office of the Vice President – Honourable Sylvia Chalikosa, Minister of Local Government – Honourable Vincent Mwale, Minister of Health – Honourable Chitalu Chilufya, the Deputy Mayor of the City of Lusaka – Chilanda Chitangala, various government officials and Puma Energy Zambia Plc General Manager – Yahaya Yunusa.

Speaking during the handover of the dustbins, Yahaya Yunusa, Puma Energy Zambia Plc General Manager said: “Partnerships between the private sector and local government in the management of Lusaka’s waste and sanitation will go a long way in helping to keep our communities clean thereby ensuring the residents of Lusaka can experience a better quality of life”.

Yunusa further said that: “In recognising the everyday challenges Lusaka City Council faces in the mammoth task of waste collection and management to keep the environment clean, Puma Energy is pleased to extend our support in the communities we conduct business”.

Puma Energy commends all national agencies for the actions currently being undertaken to arrest the spread of the ongoing cholera epidemic; and, calls on residents of Lusaka and elsewhere to inculcate a culture of consciously and responsibly deposing waste in designated areas.

The Deputy Mayor of Lusaka, Chilanda Chitangala, thanked Puma Energy for their contribution and support, which complements LCC’s ongoing waste management initiatives.  The Deputy Mayor said: “My office has been engaged in a multi-prong effort to address the litter and waste management problem in Lusaka.” “One of the key features of this initiative is the cooperation of all stakeholders working together to help keep our communities clean”. “When everyone does their part, we can all look forward to a cleaner and more beautiful Lusaka for many years to come”.

Puma Energy reaffirms its commitment to the communities in which it operates. Yahaya Yunusa concluded that: “We encourage members of the private sector to support local government in the management of Lusaka’s waste and sanitation thereby helping to improve the quality of life of the residents of Lusaka. We at Puma Energy laud the efforts of their work done so far”.