In a letter written to Mr Lubinda’s lawyers Mr Tayali asked the lawyers to discontinue the case so that they can settle the matter out of court.

He said that he had no financial capacity to pursue the matter in the courts of law and that continuing with the matter in court would not only waste the Court’s time but a waste of taxpayers money.

Below is the latter 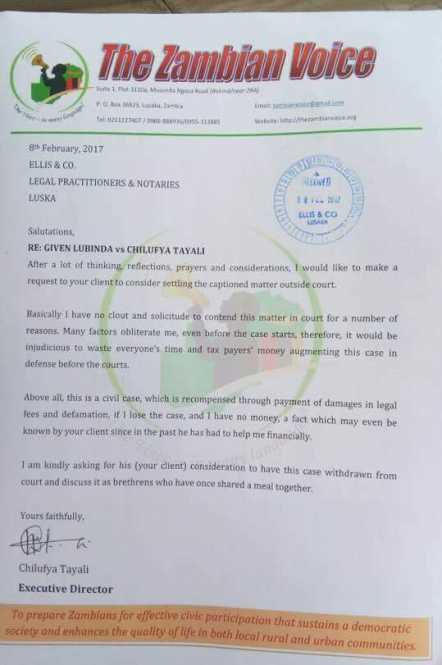 Mr Tayali had accused former Agriculture Minister Given Lubinda and FRA Director Chola Kafwabulula of running a cartel  of corruption at the FRA.

Mr Lubinda sued Mr Tayali for defamation with the latter having insisted that he had a strong case against the former Agriculture Minister who is now Justice Minister.

Mr Tayali said last August at a media briefing accused Mr Lubinda and his cartel of causing the increase in the prices of mealie meal through their dubious dealings at FRA where he said they had been charging an extra K1000 per tonne on maize purchases from FRA shades.

He accused them of amassing over 720million from the sales money he said belonged to the Zambian people who have been buying mealie meal at unaffordable prices.

He said accusations that the opposition was causing panic buying was hogwash as people did not have enough money to buy mealie meal in bulk and store in their kitchens.

Mr Tayali said Mr Lubinda was living in a house as big as a church while the Director at FRA  had 4 customized vehicles worth K4.5 million less than two years from driving a Mark 2 Chaser when he was employed by Mutembo Nchinto.