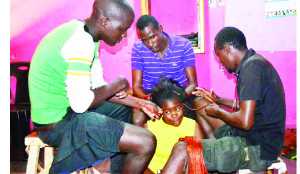 THE much sought-after and highly trending Masai twist braid has compelled some women to pay in kind for the service.
At open-air salons two men’s fingers work quickly on each braid, weaving it tightly together as they work their way down before quickly starting on the next strand.
Just over a year ago these men were herding their cattle on the plains of Amboseli in Kenya but rumours of well paying jobs brought them to Lusaka, Ndola and Kitwe the bustling cities of Zambia.
Having had to learn how to weave hair into thin braids during their warrior initiation, which takes place when boys are aged between 17 and 20, the Maasai are now famous for their neat and fast work.
Zambian women are flocking to the markets where the Masai have their stalls, happy to pay a higher price of between K250 and K350 to get their hair done.
This has surprisingly turned into another trend of pay-preference as Sunday Times investigations revealed that most of the Zambian women were even getting married to the Kenyan hair stylists.
It has been discovered that apart from possessing the hair styling skills, the Maasai men also have a sexual libido which some Zambian women appreciate.
The growing trend of Zambian women getting closer to Masai men not only for hair has become a source of concern among Zambian men especially at Lusaka’s Common Market for Eastern and Southern Africa (COMESA) trading area.
“These Masai men have a special meal which comprises of roast meat and milk and we don’t know what they add to the same to highly enhance their sexual libido which can last overnight, many of our women here at COMESA have actually been taken by the same Masai men,” a source said.
Most Zambian men talked to at Lusaka’s COMESA market have confessed that they were now finding it hard to give the minority group a warm shoulder as they were perceived as threat to locals.
Another man owning a jewellery shop in COMESA said he knew Masai people as brave warriors who got what they wanted including women.
He disclosed that what was worrying was the fact that the Masai were plaiting on credit on the condition that they exchanged phone numbers with women.
However, one Masai operating on Freedom Way refuted the allegations levelled against them, saying the Masai people were just like Zambians who behaved themselves.
He said they were in Zambia for business and not to chase after women although he admitted that some Masai men were naughty and could do that.
In Ndola, a Kenyan only known as Peter said: “It’s up to me what I do with my body and if it’s worth it for me to trade my time doing sex favours with Zambian women for a fair hair deal It’s fine with me.”
In Kitwe a 25-year-old woman said the Masai were just one example of an African community that had managed to settle and thrive in Zambia, saying that getting married or having an affair with them was not a bad idea.