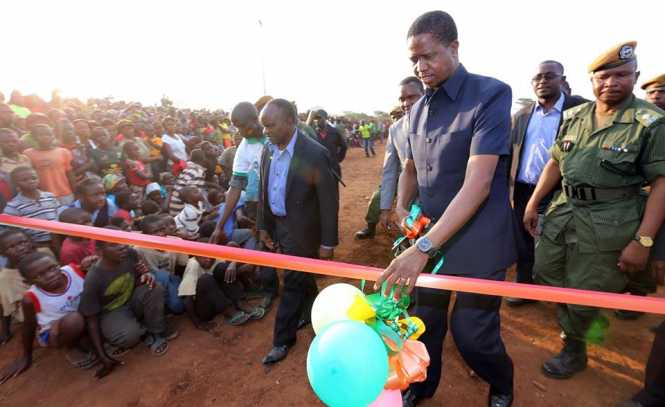 And President Lungu says the construction of the power station will go a long way in mitigating the enormous power deficit the country is currently facing.

The President says government will spend about 2 billion US dollars of which an initial sum of one hundred and 86 million dollars has been released.

President Lungu says the financing cost of the project will mainly come from borrowed funds.

The President says his government shall judiciously borrow funds for essential investments like power projects.

President Lungu says recouping investment made in the power generation projects is assured because the energy sector is viable with assured market for its products.

President Lungu says those who doubt his government resolves to address the power shortage must know that the situation is a serious matter.

The President was speaking today when he officially commissioned the construction works for the power plant in Chikankata District.

And Chairman for Sino-Hydro the company engaged to construct the works, Song Dongshen said his company will also construct a training school to benefit the locals.

However, speaking earlier when he met some Chiefs in Kafue and Chikankata Districts, President Edgar Lungu instructed ZESCO to electrify all areas where power generation plants are situated.

President Lungu says people living in the areas where the power generation plants are built sacrifice a lot at the construction phase including displacement.

President Lungu said the benefits of such huge investments should therefore benefit the indignant habitants.

The President praised the collaboration between government and chiefs saying it would be difficult to achieve development without the involvement of chiefs.

And Chief Nalubuama of the Tonga people says the traditional leaders will always support government programmes.