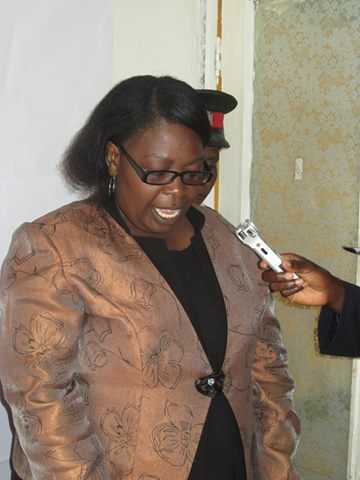 KASEMPA acting district commissioner Mercy Kambita has died in a road accident on the Solwezi-Kasempa road.
Ms Kambita died yesterday when she was travelling from Kasempa to Solwezi after the Isuzu Bighorn she was driving overturned at about 08:30 hours at a place called Kimabokwe, 32 Km from Kasempa boma.
Both North-Western Province Minister Dawson Kafwaya and provincial deputy divisional criminal investigations officer Gloria Cheelo-Mulele, confirmed the development in separate interviews.

“We received a report of an accident which occurred today (yesterday) at about 08:30 hours, and involved was a female, Mercy Kambita, who is acting DC for Kasempa,” Mrs Mulele said.
She said Ms Kambita died on the spot after she lost control of her vehicle and overturned. The body is lying in the Mukinge Mission Hospital mortuary.
And Mr Kafwaya said Government is saddened at the untimely death of Ms Kambita.
He explained that Ms Kambita was travelling from Kasempa where she was attending to some family matters when she met her fate.
Meanwhile, a man believed to be in his late 40s died on the spot after the vehicle he was driving overturned on the Solwezi-Mwinilunga road on Tuesday.
In another development, one person has died, while five others sustained injuries, when the vehicle they were travelling in overturned 90Km south of Mpika, on the Great North road, MAPALO LUPUPA reports in Chinsali.
Muchinga Province deputy commissioner of police Peter Bubenshi, said the five survivors are currently admitted to Mpika District Hospital.
“The deceased, identified as Greenford Silwamba, of AN unknown age, from Kitwe, died on the spot,” Mr Bubenshi said.
He narrated that the six were travelling towards Mpika, from the Serenje direction, when a Hyundai van registration number ZBF 552 GP, which was allegedly being driven at high speed, flipped and landed on the other side of the road.
He said the vehicle is extensively damaged and the five injured passengers are yet to be identified.
And in Mbala, a 17-year-old boy has died after falling off a bicycle he was riding on his way to school, MUBANGA NONDO reports from Ndola.
Northern Province acting commissioner of police Lackson Sakala said in an interview yesterday that the incident happened on Tuesday around 05:30 hours at Kakondo village.