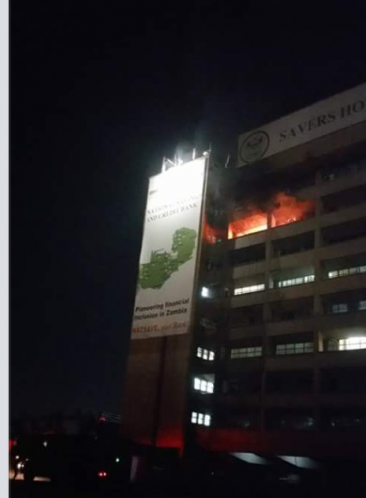 A financial scandal has emerged at the National Savings and Credit Bank involving top management, raising questions as to whether the fire that gutted two offices at its headquarters last week was an accident.

According to an audit report, NATSAVE managing director Cephas Chabu is allegedly entangled in an irregular payment for a quarter-page advert in a French magazine, at over K600,000.

But Chabu says allegations against him are malicious, baseless and meant to tarnish his image.
NATSAVE, a bank wholly-owned by the government, is facing several audit queries emanating from contractual agreements signed without following tender procedure.
The report revealed that NATSAVE sealed a contract on January 13, 2012 and made a payment of 46,366 euros (about K630,000) to a French advertising agency called Universal Communications, for a quarter-page advertisement in Le Point Magazine, without following tender procedure.
“NATSAVE management entered into a contract against the provisions of Section 25 of the public procurement Act no. 12 of 2008 and section 33 of the banking and financial services Act, CAP 387 of the Laws of Zambia,” the audit report reads in part.
The report further indicated that the bank failed to produce evidence at the time of auditing, to show that it got the services for the payment it made to the advertising agency.
According to an email sent at 10:12 hours on January 8, 2015 by Chabu’s personal assistant Chipo Ngoma ([email protected]), the bank’s managing director wrote to Le Point Magazine, asking why the paid-for advert had not been published.
“Following our numerous emails and communication to yourselves over the publication, Mr Nathaniel Aknine via Universal Communications, which he was to publish an article in the Le Point Magazine in 2013, we have not received much help on this issue and hence find attached a letter drawn for your urgent attention which I had forwarded [some] time in November 2014,” read the email in part.
“Mr Aknine was paid full payment of euros 46,366 bank transfer to his account and we had requested you to help us establish his whereabouts in France as we have not heard from him since he left Zambia in 2012. We will indeed appreciate your utmost help on this matter and thanking you in anticipation. Best regards, Chipo Ngoma, personal assistant to the MD, National Savings and Credit Bank Lusaka.”
But a purported response from Le Point Magazine stated that it did not have any business dealings with any Zambian organisation and that it did not know Aknine.
“Dear Sir, I am in charge of international advertising for Le Point. Since the French Ambassador in Zambia and Malawi contacted us, Le Point has not been publishing any special report dedicated to Zambia. Thus, I may confirm that Le Point did NOT receive any money from Mr Nathaniel Aknine, or from Universal Communication in the form of a report dedicated to Zambia. We at Le Point do not have any contact with Mr Aknine,” read the email in part.
Last week, fire gutted two offices on the seventh floor of the Savers House building, which, according to sources, houses financial records for NATSAVE Bank.
“These are the departments which keep the financial records needed in the investigations for these matters. So you should be asking questions as to whether the fire was an accident or not. You reported that when you informed the MD, he said he was driving from Livingstone to Lusaka. He had not yet arrived at the scene, but he told you that the bank does not suspect any foul play. How did he say that before the investigations even started?” wondered the sources.
But when contacted, Chabu said the accusations were meant to tarnish his image and to destroy the bank.
“How can people surely twist things like that, it is very bad. Such stories are malicious! People want to destroy others through making malicious statements and at the end of the day, when you come to know the truth, it is a bit late. Those are malicious people, they just want to destroy me and the institution, it is not right,” said Chabu.