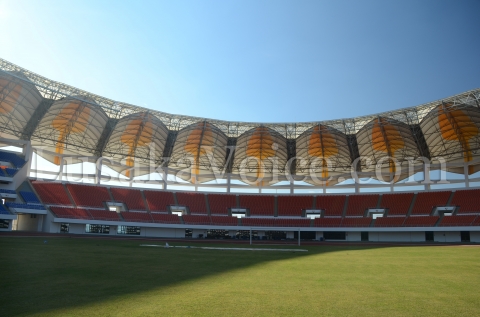 The incident happened around midday at the weekend but so far only two fire extinguishers have been recovered.
A caretaker at the US$94 million facility informed Sports Minister Vincent Mwale yesterday when he visited the Zambian athletes preparing for the All Africa Games slated for Congo Brazzaville next month.

She said the stadium security has not yet traced the thieves but managed to recover two fire extinguishers.
Mwale expressed regret over the theft and wondered how such a thing could happen when the stadium had enough security personnel.
“This is very worrying especially that I am being informed about this now. We have employed enough security here but I am shocked that we even get to have thieves during the day,” he said.

The Minister said he will direct his permanent secretary to establish the truth on the matter and that there was need to start looking at fencing the premises because a lot of money was spent to build the stadium.
Mwale said the theft is a draw back to the ministry that spends over a K100,000 to pay for water, electricity, internet and wage bills and urged the management to report such happenings promptly.

“This is why we make people pay for using this facility because there are bills that need to be paid. And at the end of the day, we will need to replace all that, so people should not be complaining that we make them pay huge amounts because we spend a lot,” he said.
He said the Government had the role to provide such facilities to the athletes and urged them to take good care of it as they use it for their training.

“Already, we also owe our insurance company about K500,000 for Heroes and Levy Mwanawasa Stadium, and we need to pay to renew insurance again, so you see why we have to charge a lot to the users,” he said.
During his visit, Mwale re-emphasised on the need for the athletes to reciprocate Government’s sponsorship of K4.9 million by winning medals at the AAG.

Mwale, who had lunch with the athletes, took time to inspect their lodging, training and cafeteria.
Earlier in the day, Mwale, who received the Zambia Polo cross team, commended the squad for minting silver at the World Cup held in South Africa.
Zambia’s Lauren Watson was voted the Best Lady Player-of-the-tournament.