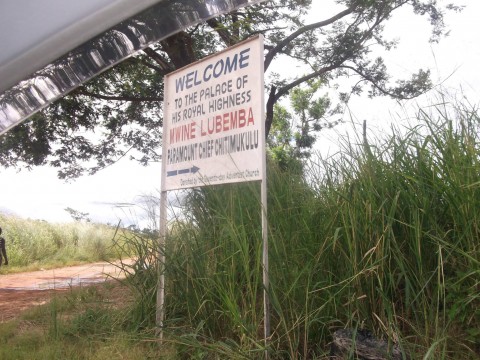 HENRY Sosala was in high spirits at his palace in Malole ahead of his installation as Chitimukulu of the Bemba people, a process that started yesterday at a secret location, as per custom.

The new Chitimukulu , who replaces Mwine Lubemba Chilufya Chitapankwa, who died on April 4, 2012, was in a jovial mood yesterday, even playing friendly banter with his traditional cousin Zindaba Soko, the Road Transport and Safety Agency (RTSA) chief executive officer, who paid a courtesy call on him at his palace.

He joked about Easterners, who he said upon learning Bemba, start using it in court, with people thinking that they are Bemba when, in fact, they are from the Eastern Province. He also said in Lambaland (Copperbelt), they are changing Bemba names such as Musonda to Muzo and Mulenga to Mule.

“But you [Zindaba Soko] haven’t told me your name, what are you afraid of?” he asked Mr Soko as his board chairperson Webster Nonde came to his rescue, saying he will ensure that his chief executive officer is safe.
This is evidently a man who has come out of ‘exile’ as he himself put it here yesterday.
And rightly so.

Having been appointed the new Chitimukulu in August 2013 by the Bashilubemba, it was only on January 27 this year that President Lungu officially recognised him as Chitimukulu of the Bemba people, who are also celebrating the Ukusefya Pa Ng’wena traditional ceremony at Ng’wena village tomorrow.

It is a momentous occasion here, with President Lungu expected to officiate at the installation of the Chitimukulu today and Vice-President Inonge Wina at the Ukusefya Pa Ng’wena tomorrow.
The complexion in Kasama and Mungwi is a positive one, with scores of people gathered at the palace yesterday and ready to celebrate until Sunday when things are expected to be a little quiet.

In many ways, you would say this is the place to be; with Mungwi not offering much in terms of accommodation, Kasama has completely run out of lodging places, forcing some visitors to go as far as Mbala for shelter.

“We’re celebrating that finally the Chitimukulu will be officially installed. We suffered a lot. We can only be thankful to the President [Lungu] for what he did in officially recognising the Chitimukulu. The country is now happy, a heavy load has been lifted. Now we want the same to be done with Chief Nkula, Chief Munkonge and Chief Chikwanda,” one of Chief Chitimukulu’s returners Abraham Kasongo said in an interview at the palace.

And Northern Province permanent secretary Hlobotha Nkunika, who confirmed the arrival of President Lungu for today’s inauguration and Mrs Wina for tomorrow’s ceremony, says they are expecting a huge number of people to be in attendance for the ceremony.

“We have ambassadors, chiefs from all corners of the country coming. This is good for tourism in Northern Province. We’ve a lot of tourist attractions like the Chishimba Falls and Kalambo Falls for them to sample,” he told a delegation from RTSA, which paid a courtesy call on him at his palace.

Mr Nonde has warned motorists against breaking traffic rules during the ceremony.
Speaking to journalists at the Chitimukulu’s palace ahead of the ceremony, Mr Nonde said RTSA will ensure that it monitors traffic and that there are no accidents resulting from careless driving.

“We urge the drivers to maintain law and order and ensure that they are sober and maintain safe speed during this period,” he said.
He said RTSA is aware that there will be a lot of people from all parts of the country, hence the need to have peaceful and incident-free celebrations.