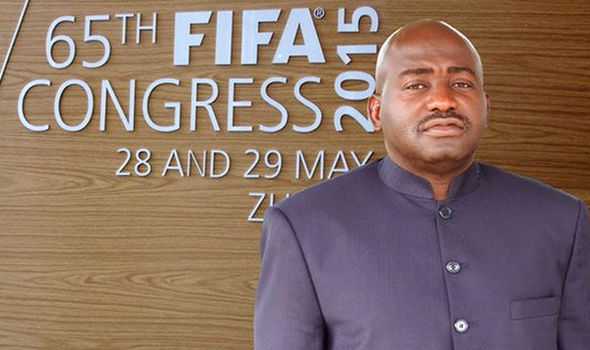 Liberia FA (LFA) president Musa Bility says he will step aside if the Confederation of African Football (Caf) boss Issa Hayatou wants to bid for the Fifa presidency.
Bility announced his intention to stand in June after current Fifa president Sepp Blatter announced he would step down amid allegations of corruption among officials.

“I believe that if the president of Caf puts up his hand up to run, I would definitely bow out of the race to him,” Bility told BBC Sport.
The 48-year-old Bility is the second person to declare his candidacy after former Brazil international Zico.
Bility, who has led the Liberian FA since 2010, is only the second African to make a bid to become Fifa president after Hayatou lost to Blatter in 2002.

The LFA boss admits that he is yet to speak directly to Hayatou about his bid.
“Well I’m aware that he has got the message and I have an indication of his reaction, and it’s not negative,” he said.
“The fact is that I have not spoken with him and I intend to do that very soon.”

The two men have not always seen eye-to-eye. In 2011 he broke ranks with most of his African colleagues by declaring he would vote against Blatter in that year’s Fifa elections.
A year later Bility and the LFA took a case to the Court of Arbitration for Sport over changes to the way Caf elects its president, which favoured Hayatou.

The court twice ruled against the LFA and then in 2013 Bility was banned from all football activity by Caf after the governing body said he “had violated statutes relating to the use of confidential documents”.
However Bility insists that their differences are now a thing of the past and wants Hayatou to give him a chance.
“I think after all the storm, we have come to appreciate each other,” he said.

“In the last two years, we’ve worked closely with each other and so he knows what I’m capable of doing and I’m sure he himself would love to see reform, and definitely they all know I’m a reformist.
“I would tell him [Hayatou] to give me the chance to make you proud – give me the chance to make Africa proud.”
Fifa has called an extraordinary meeting of its Executive Committee for July, when the date for the presidential elections will be decided – they are expected between December 2015 and March 2016.