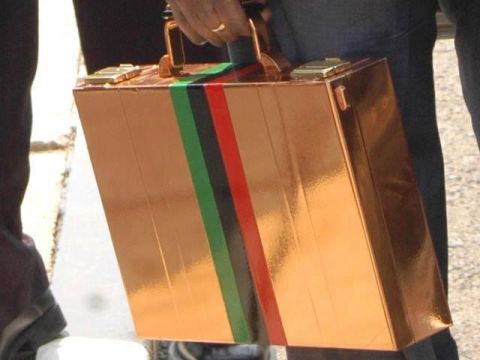 Zambia’s plan to plug a gaping budget deficit by more than doubling foreign bond issuance is sending dollar-borrowing costs to 14-month highs.
It could get worse, according to Oliver Saasa, a consultant who was briefed about the plan to raise as much as $2 billion in Eurobonds by a Finance Ministry official. The southern African nation may have to pay as much as 10 percent for the new debt, about 2 percentage points higher than yields on existing securities, he said.
Zambia’s finance ministry said last week the deficit would swell to more than 6 percent of gross domestic product, compared with a previous target of 4.6 percent, after the government exceeded budgeted expenditure and reversed a planned increase in mine taxes at a time when low copper prices are crimping revenue. That’s optimistic, according to the International Monetary Fund, which said in a report on Tuesday the shortfall could widen to 7.7 percent even with proposed spending cuts and a government salary freeze.
“I don’t know how they could get it so terribly wrong,” Saasa, the chief executive officer of Premier Consult Ltd. and a director at Stanbic Bank Zambia Ltd., said by phone from Lusaka, the capital, on Tuesday. “They are definitely going to get very expensive,” he said, referring to the planned Eurobond sale.
Yields Jump
Yields on Zambia’s $1 billion of dollar notes maturing in April 2024 jumped 39 basis points on Wednesday to 8.21 percent, the highest since April 2014. The bonds pared declines on Thursday, with yields dropping 18 basis points to 8.04 percent by 8:07 a.m. in London. That compares with 6.32 percent for similar-maturity Nigerian dollar debt, 6.8 percent for Kenya and 9.46 percent for Ghana.
The southern African nation may start meeting investors over the planned sale in the first week of July, Saasa said. Finance Minister Alexander Chikwanda said Wednesday he has told parliament of the government’s intention to finance the 2015 deficit by selling Eurobonds. He declined to comment on how much Zambia plans to raise or give details on timing.
“If we go to the bond market we’ll go to the bond market,” he said.
Chikwanda cut this year’s economic growth target to 5.8 percent from a previous estimate of more than 7 percent. Zambia will save an estimated 5 billion kwacha ($673 million) through “rationalizing” spending by starting new projects only when current ones are completed, he said.
Debt Costs
The country is Africa’s biggest copper producer after the Democratic Republic of Congo. The metal, which accounts for 10 percent of Zambia’s gross domestic product, more than 70 percent of export earnings and 12 percent of government revenue, according to the IMF, has dropped 14 percent over the past year in London. Elections next year pose the risk that Zambia may renege on promises to cut spending, the Washington-based Institute of International Finance Inc. said in a report last month.
Increased external borrowing may lift Zambia’s annual debt-servicing costs to about $500 million, from $150 million, Chikwanda said.

Moody’s Investors Service last month cut its outlook on Zambia’s Eurobonds to negative, citing increasing debt costs as one of the reasons.
In its report, the IMF expressed concern that Zambia’s increased reliance on external funding may place too great a burden on state finances and urged the government to avoid “excessive” foreign debt. Other measures, including tax increases, should be used to narrow the budget shortfall, the IMF said.
“It would be prudent to limit debt-financed spending to critical public infrastructure projects,” the Washington-based lender said. “If the deficit is not reduced, the fiscal position will become unsustainable.”