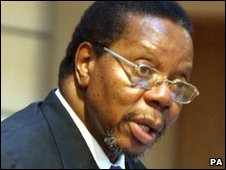 Malawi government spokesperson Kondwani Nankhumwa, who is also minister of Information, Tourism and Culture, alleged on Saturday that Bingu waMutharika who died in office on April 5, 2012, was murdered by a group of politicians under what he termed â€śJB Projectâ€ť.
Nankhumwa made the accusation during Bingu wa Mutharikaâ€™s memorial held at his burial place, Ndata Farm, in the southern district of Thyolo, saying he had evidence on the plot to kill Mutharika and he asked President Peter Mutharika to institute fresh investigations into his brotherâ€™s death and bring those responsible to justice.

But speaking through his spokesperson Gerald Viola on Tuesday, Mutharika distanced himself from the government spokespersonâ€™s remarks, saying â€śthey were not the presidentâ€™s nor the cabinetâ€™s views, but the spokespersonâ€™s personal viewsâ€ť.

When Mutharika died, his deputy Joyce Banda, popularly known as JB, came into power and immediately instituted an inquiry into Bingu wa Mutharikaâ€™s death and the results revealed that he died of cardiac arrest.

Mutharika, who was foreign minister at the time of his brotherâ€™s death, came to power after winning the May 2014 presidential polls, beating 11 presidential candidates including Joyce Banda who ruled for two years only.

He had said his departed brother taught him among other things to â€śforgive others and not to jump to conclusions about others.â€ť â€“ Xinhua.