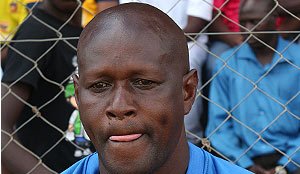 THE Zambia Football Coaches Association (ZAFCA) says administrators should not use coaches as scapegoats to cover up for their failures.
ZAFCA vice-president Lewis Shambulo said it was unfortunate that coaches were being fired and in some instances sent on leave purely as scapegoats by administrators trying to cover up for their failures.
Shambulo’s comments come in wake of recent firing of Nkana assistant coaches Gift Kampamba and Zeddy Saileti, while Napsa Stars have put headcoach Hector Chilombo and his assistants Evans Sakala and Samuel Banda on suspension.
FAZ Division One South side, City of Lusaka sidelined assistant coaches Tony Mukwasa and Charles Kafula while Forest Rangers headcoach Dabid Chilufya and his assistant Willy Nkonde are currently serving a three-month forced leave with their future at the club uncertain.
But Shambulo said coaches in the country are paying the price for the failures of administrators.
Shambulo said such developments were targeted at shielding the deficiencies in administration and that if left unchecked, could hinder the progress of the game in the country.
“As far as we are concerned, we are one of the countries that have shown serious commitment in training coaches, but I think our efforts are being suppressed by those in administration,” Shambulo said.
He said it was unfortunate that administrators expect a coach to perform miracles when they (administrators) have failed to provide the necessary requisites for one to deliver positive results.
“We understand that coaches and clubs enter into contracts with various conditions set, but we feel producing results is due to collective effort. We should avoid heaping the blame on the coach even when administrators fail to do their part for the success of teams,” he said.
Shambulo said ZAFCA was open to any coaches that would seek guidance before being engaged by any clubs.
He said the association was determined to ensure that the interests of coaches in the country were safeguarded.-TimesofZambia