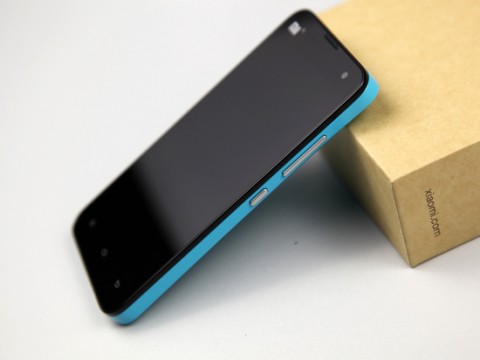 Few outside China are likely familiar with smartphone maker Xiaomi, but some analysts are already calling the company a potential threat in the long run to dominant players like Apple and Samsung.

“A lot of people refer to [Xiaomi] now as the Apple of China,” said Brian Blair, analyst at Rosenblatt Securities. “[Xiaomi] has definitely taken away from Apple’s share.”

In China, Samsung leads the market but Xiaomi (pronounced SHAO-MI) outsells Apple with its budget devices that closely resemble the iPhone and iPad mini. The parallels do not stop there. CEO Lei Jun strikes a Steve Jobs-like persona at launch events and Apple co-founder Steve Wozniakeven appeared on stage during a Xiaomi celebration in January.

Apple’s market strength will be tested this fall when it is expected to launch the iPhone 6 in China with a screen likely on par with the 5″ or larger displays from Xiaomi and Samsung that are popular in Asia, Blair said.

But with its Android-based devices, the Chinese company competes more directly with Samsung than Apple, analysts said.

That ranking could change this year. Xiaomi beat Lenovo to second place in an ABI Research report on Chinese smartphone shipments for the first quarter, while Samsung still topped the list.

Xiaomi even took first place in a report from China Mobile on new users in April, indicating popularity among first-time mobile adopters such as teenagers. The world’s largest network provider said the Chinese upstart led with 1.75 million new units, while Samsung was fifth at 1.27 million units and Apple 11th at 297,000 units.

Given that Xiaomi began selling smartphones just three years ago, its rapid growth in the domestic market is impressive. One of the reasons for the rise is the company’s strong relationship with customers, analysts said.

The Beijing-based firm only sells through e-commerce retailers and directly to consumers, which is not typical, ABI Research analyst Nick Spencer said in a statement.

Xiaomi offers a limited number of devices for sale during flash sales, which for the last few weeks have occurred on Tuesdays at noon. Customers must make accounts on the site prior to purchasing and are limited to one of each device in order to prevent scalpers, according to the website’s FAQ.

With this strategy, Xiaomi claims to have sold more than 10 million smartphones in China in the first quarter of 2014, on track to reach its annual target of 40 million units in 2014 and to become the fourth largest player in China, Forrester analyst Bryan Wang said.

Last year, Xiaomi missed its 20 million goal by 1.3 million, but sales were more than double that of 2012, according to ABI Research.

Low cost is another key factor for Xiaomi’s growth. On Amazon.com‘s Chinese site, the iPhone 5s lists at almost $800, while the latest Xiaomi phone, MI 3, costs less than $300. Other Xiaomi models such as Redmi sell for just over $100.

Just as importantly, Spencer said that Xiaomi has a well-developed ecosystem. Its devices run a customized, Android-based system called MIUI, which the company claims to make $4.9 million a month in revenue from, Spencer said. Other, non-Xiaomi devices can also download versions of the software.

“What makes Xiaomi interesting is that it has a software ecosystem play, and an innovative and highly effective marketing or user community strategy,” he said.

With its own messaging service, virtual currency, games and e-book platform, Xiaomi also reaches into the territory of Chinese tech conglomerates such as Tencent and Weibo. Add the company’s cute rabbit mascots and highly active user forums that discuss everything Xiaomi from the latest devices to product interface, and there is little surprise that the firm has gained what many call a cult following.

However, the allure Xiaomi has in China may keep it from succeeding in the United States and elsewhere.

“Xiaomi is a challenge in China and adjacent markets to Apple and Samsung, but its community-based strategy is hard to replicate beyond that,” Spencer said.

In a shift from the original name, which literally means “Little Rice” in Chinese, Xiaomi rebranded in April to the more universal-sounding “Mi.” Last month, the company also launched a website targeting India, adding to several other Asian branches outside of China.

But analysts said it will take a strong marketing plan and more unique devices to steal the spotlight from Apple and Samsung on the global stage. In particular, the carrier-dominated U.S. market will be hard to break into.

Xiaomi may have its own reasons for not wanting to venture far from its home base just yet. “They have not captured their whole market share there,” Blair said. “They’re not anxious to jump out of China because they’re still in the copycat mode. Samsung was in the copycat mode for a long time.”

The private Chinese company, which ABI Research values at $10 billion, did not respond to requests for comment.