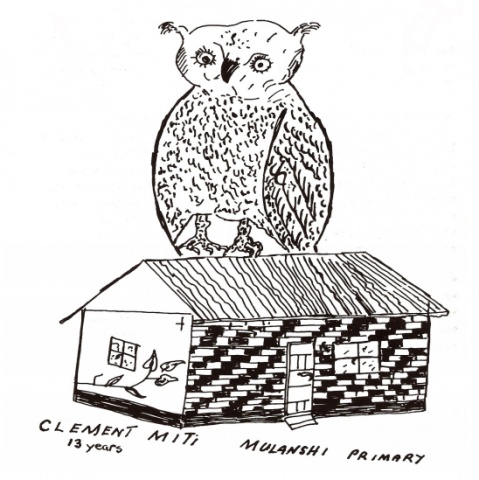 This fascinating piece of ethnoornithological research explores the knowledge and beliefs of and about Owls by secondary and primary school-children in Zambia. I’d love to know if any of the students went on to become biologists or natural history workers later in life.

A few days ago a colleague over at the Ethnoornithology Research and Study Group uploaded a link to a fascinating piece of ethnoornithological research done in Zambia in the early 1990′s by the Zambian Ornithological Society, now known as BirdWatch Zambia.

The good people of the ZOS decided that they wanted to better understand how children appreciated – and what they knew about – Owls.

As the Foreword to this modest publication notes, Owls:

Do people in Chipepo tell the same stories as people from Kasama?

How could the ornithologists find answers to all these questions?

The Society figured the best way to hear what children thought about birds was to ask them to write and draw what they knew of this most charismatic family of birds..

School children could help. During the holidays they could go home and ask their elders some questions about owls. The answers could be written down and sent to the Zambian Ornithological Society.

This is how children from all over Zambia became a part of theOwls Want Loving Survey. One result is this book, written by Secondary School pupils and illustrated by Primary School pupils.

There is a very serious message to this book that treads the boundary between scientific “facts” and traditional knowledge.

One of the most important messages the ZOS wanted to get across was that Owls perform and provide valuable ecological and economic services.

Traditional stories are told of owls helping witches. These stories say that owls carry witches to faraway places. A lot of stories tell of owls crying out when a person is about to die.

If the stories are NOT true then owls should not be killed. Owls fly at night to catch food. Owls eat rats and mice, snakes and even bats. A family of owls living on a farm can eat over one thousand rats in a year. Rats eat maize from grain stores. Everybody knows that.

Everybody wants to get rid of rats, AND OWLS GET RID OF RATS FOR YOU!

Here are a few snippets from the good students.

Agnes Mushabati of the Nyenyezi Secondary School wrote the following:

There are other owls which are bigger than the Barn Owl…One of these bigger owls is called “Tumba wa mu sokwe Mupati” in our language. This means: the owl that lives in the forest.

I asked my mother why people persecute owls. She told me some of the things people believe about owls. They believe that if an owl sits on top of somebody’s house that person will receive bad news after a few days. Or it may mean that there will soon be a funeral. People also believe that if an owl sits in the fields where you grow your food, the crops won’t grow well. It is also believed that people who practise witchcraft use owls to help them.

These witches send an owl at night to the person they want to bewitch. They give the owl power kill someone. This superstition comes from Takoland, in Chief Musokatwane’s area of Kabondo, in Kalomo district.

Aaron Banda of the Kalonga Secondary School says of Owls in his district that:

In our language, an owl is called “Manchinchi“. This bird is terribly feared. Traditionally, people say that these birds are feared because they move about and feed only at night.

People believe that they are used by people who practise witchcraft as a means of transport. Witches are said to use owls to get from one place to another during the night. So that is why people fear them. That is, because they think they might be bewitched by the witchcraft that is in the owl.

There are also a number of references to the various names given to owls in the many languages and dialects of Zambia, including the following selection of names for the Barn Owl.

Peter Owa from Muyooma Primary School says that the name of this owl is “kanamaja” in the Ngoni language.

Estone Mwape from St Clement’s Secondary School says that in the Ichibemba spoken in Mansa District the Barn Owl is called “mwiina“.

Victor Kasanyola from Muyooma Primary School says that in Lenje the Barn Owl is called “moma“.

Wilson Phiri from Matero Boys Secondary School says that the owl is called “fyololo” in the Chewa language.

Through the powers of the interwebs I’ve found that Nikki Ashley, who incidentally has had a long career in Zambian radio and music production, was involved as an editor of  the “Owls Want Loving” project. At herLinkedin profile she says of the book that:

The authors were members of the Chongololo and Conservation Clubs of Zambia.

This book started life as a competition proposed by me to the Zambian Ornithological Society.

I was keen to find out if superstitions about owls were the same throughout Zambia; and to collect some of the myths and beliefs. (Younger children were asked to draw a picture of an owl.)

The resulting flood of entries were of such high quality that the Curriculum Development Centre designed an English Reader for Primary schools.

These words by Nikki Ashley remind me of a similar project (as yet unpublished) undertaken by my friend Fleur Ng’weno and staff at the Kenya National Museums that also involved local children being asked to record and write-up the traditional bird knowledge of their families.