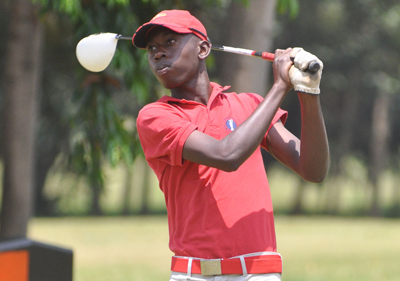 DENIS Otim returned 78, Uganda’s best score on day two of the All-Africa Junior Golf Challenge at the Chainama Hills Golf Club in Zambia but Uganda slipped to 5th position after the day-two action.

Ronald Otile (79) shove off eight strokes off his opening 87, with Andrew Byaruhanga carding 79 for an aggregate score of 236 on the day.

Uganda’s best performer on day-one Daniel Baguma was off the mark on the second day signing off with 83 gross, eight strokes worse than his opening round of 75.

Overnight leaders South Africa kept their title defence on track, signing off with an aggregate score of 223 and a total 443 after the two days.

After rocky performances around the front loop at Chainama Hills Golf Club, Jovan Rebula and Kyle McClatchie rallied on the home stretch to close with 74s, while Altin van der Merwe added a lone drop to a pair of bogeys on the front nine to sign for a 75.

South Africa can hardly afford to relax, though, after last year’s runners-up Zimbabwe finished just 11 strokes off the pace.

Assisted by an 80 from Justin Kersten, the side matched South Africa’s opening score and their 222 helped the team to comfortably leapfrog Zambia, Reunion and Uganda into second on 454.