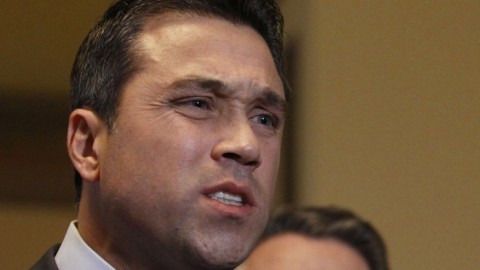 New York Rep. Michael Grimm was indicted Monday on 20 counts of fraud and other charges relating to a Manhattan restaurant he owned and operated, accused by federal prosecutors of evading the IRS and making over $1 million in revenue “disappear.”

The Republican congressman, who is a former FBI agent, pleaded not guilty at his arraignment in Brooklyn. After he was arrested earlier in the day, Grimm was released on $400,000 bond. He was ordered to stay within the continental U.S., and surrender his passport by May 11.

“Michael Grimm made the choice to go from upholding the law to breaking it,” U.S. Attorney Loretta Lynch said at a press conference detailing the charges. “And in doing so, he turned his back on every oath he had ever taken.”

Just hours after Justice Department officials unveiled the charges, Grimm vehemently defended himself against what he called a “political witch hunt.”

“We’re going to fight tooth and nail until I am fully exonerated,” Grimm said outside the courthouse, flanked by his attorneys.

His attorneys would not discuss the charges against him, but the congressman vowed to stay in office and continue running for re-election in the fall.

“I don’t abandon my post,” he said. He claimed the bright spot, after a lengthy FBI investigation, is that he now knows who his accusers are. Taking a defiant tone, Grimm described the case as a “vendetta” designed to get him out of office.

Grimm is a former FBI special agent and Marine Corps combat veteran. Justice Department officials highlighted this profile in describing the significance of the charges.

The indictment covered mail and wire fraud charges and charges pertaining to false federal tax returns. At the heart of the indictment was an alleged “scheme” to hide sales and wages at his Upper East Side restaurant, Healthalicious, which he ran from 2007 to 2010 before entering Congress.

Prosecutors described a relatively simple scheme, where Grimm allegedly took cash from the register of his restaurant and used part of that to pay workers off the books. In doing so, he allegedly under-reported his revenue, “making over a million dollars simply disappear.”

Lynch described it as a “deliberate plan to ….