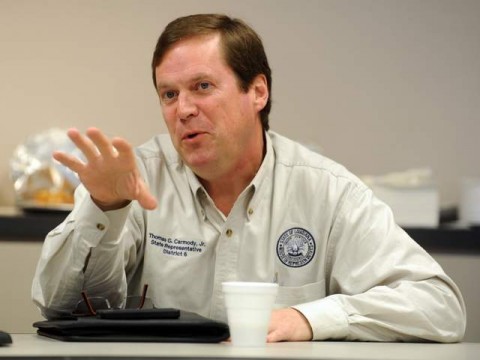 Republican Rep. Thomas Carmody told the House of Representatives that he wouldn’t pursue the measure. He said lawmakers had told him they were worried the bill was becoming a distraction from more important debates, like on the state budget and education issues.

Carmody said he sponsored the proposal after a constituent made the request, and he told his colleagues that he notified the constituent about his plans to shelve the bill, which had been scheduled for floor debate Monday.

“I told him I was going to go ahead and return the bill to the calendar today and concentrate our efforts on those things that are much more important,” Carmody said.

During committee debate earlier this month, Carmody insisted the bill wasn’t designed to be a state-endorsement of Christianity or a specific religion.

But several lawmakers said it raised questions about whether Louisiana would be violating the separation of church and state, and they said it could land the Legislature in a costly lawsuit. Critics also said it could offend non-Christians who live in the state.

Rep. Ebony Woodruff, a Democrat and a lawyer by profession, was one of those planning to vote on the grounds it would not stand up in court, reports CBS affiliate WAFB in Baton Rouge reports.

“I know in my district I have a large Vietnamese population, some are Christian but some are not and I just felt I couldn’t vote for the bill as it was because I didn’t want to leave those members out,” Woodruff said.

The topic had lit up talk radio and filled newspaper pages with opposition since the proposal won support from the House municipal committee.

Rep. Wesley Bishop, D-New Orleans, tweeted after Carmody’s speech that the lawmaker had made a “good decision.” During committee debate on the bill, Bishop said that as a preacher’s son, he loved the concept of naming the Bible as the state book. But he said that, as a lawyer, he thought the bill had problems.

As Carmody originally proposed the measure, the official state book would have been a specific version of the Holy Bible, a version from the 1500s that was the oldest edition in the Louisiana State Museum system.

Catholic lawmakers objected to the specific version of the Bible that Carmody sought to designate, so that language was stripped from the bill before the proposal was advanced to the House floor.

That change, Carmody said, “could now cause a constitutional problem that really did not appear to be able to be overcome.”