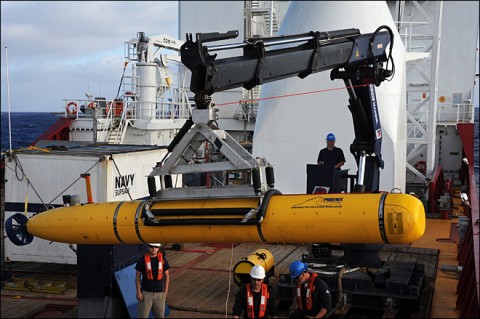 The search for debris from missing Malaysia Airlines Flight 370 continued Sunday, with an unmanned submersible continuing to scan the floor of the southern Indian Ocean. Planes and ships are again sweeping a vast stretch of the sea’s surface after past sorties failed to spot anything related to the plane.

The U.S. Navy’s Bluefin-21 autonomous vehicle began an eighth mission within an underwater radius of about 10 kilometers, or about 6.2 miles, near the area where searchers believe they detected “pings” from the beacons on the jet’s flight recorders on April 8. The vehicle has so far covered about half of its search area, with no “contacts of interest” found to date, the Australian agency coordinating the search said in a statement.

As many as 11 military aircraft and 12 ships assisted in Sunday’s hunt, with a visual search planned across two areas of the remote ocean together covering about 48,507 square kilometers, the Joint Agency Coordination Centre said.

Scattered showers are forecast, with isolated thunderstorms in some areas, and east southerly winds.

The search area in a stretch of ocean off the coast of Western Australia is thought to be the most likely spot where the Malaysian jet crashed after running out of fuel, having veered sharply off course on March 8 en route to Beijing from Kuala Lumpur with 239 passengers and crew on board. The effort’s primary goal remains recovering the Boeing 777’s “black box” flight-data and cockpit-voice recorders, although pinpointing their location has been complicated, as the batteries that power emergency locaters are estimated to last about 30 days before fading.

Malaysian Deputy Foreign Minister Hamzah Zainuddin said Sunday that relatives of passengers aboard the missing plane in Malaysia would come up with a plan for compensation and present it to government officials.

Mr. Hamzah met earlier in the day in Kuala Lumpur with some family members. He acknowledged that they were critical of the government’s handling of the incident and the lack of information about the missing aircraft.

Some passenger relatives have sharply criticized the government’s unwillingness to release information about the plane.

“I can completely understand their need to find answers,” he told reporters. “However, as I said in the briefing, we are looking for the answers ourselves.”

Mohamad Sahril Shaari, whose cousin was among the passengers on Flight 370 and who attending Sunday’s three-hour briefing, said that family members wanted proof that their relatives were dead before discussions on compensation can begin. Mr. Sahril said about 60 relatives were at the briefing, with many asking technical questions about the investigation and search for Flight 370.

“They kept on telling us not to listen to speculation and to have faith in the government,” he said.

Australia’s search agency on Saturday said the search of the focused underwater area should be completed within five to seven days. Malaysian authorities have said that even if no wreckage is found within this time frame, the operation wouldn’t be halted.

Authorities have several options available if the current underwater search by Bluefin turns up nothing. They could order a second sweep of the seabed in a tight area near the detection spot of the first signals believed to have come from Flight 370’s black boxes. The search also could expand to a wider area around the spot a series of transmissions was heard on four occasions from April 5 to April 8. The search switched to the submersible on April 14, almost a week after the last detection.