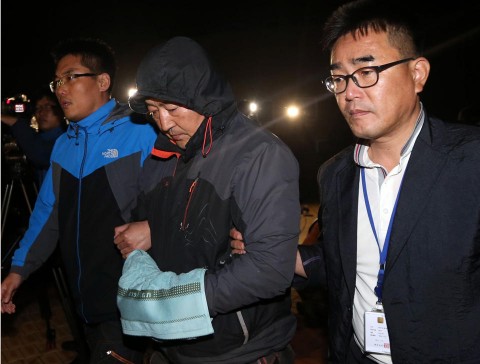 The captain of the ferry that sank off South Korea, leaving more than 300 missing or dead, was arrested early Saturday on suspicion of negligence and abandoning people in need — three of whom were seen lifeless in the drowned vessel by a diver who was unable to get them out.

Rescuers planned 40 dives Saturday in an attempt to enter the ferry and retrieve at least some of the more than 270 people missing. A civilian diver saw the three bodies inside the ship through windows but was unable to break the windows, said Kwon Yong-deok, a coast guard official. Strong currents and rain made it difficult to get inside the ferry, where most of the passengers are believed to have been trapped, coast guard spokesman Kim Jae-in said.

So far 29 bodies have been recovered since Wednesday’s disaster off the southern South Korea coast. As the last bit of the sunken ferry’s hull slipped Friday beneath the murky water off southern South Korea, there was a new victim: a vice principal of the high school whose students were among the passengers was found hanged, an apparent suicide.

Prosecutors said the ferry captain, Lee Joon-seok, 68, was arrested early Saturday along with the third mate, a 25-year-old woman identified only by her surname, Park, and helmsman Cho Joon-ki, 55. Lee faces five charges including negligence of duty and violation of maritime law, and the crew members each face three related charges, according to the Yonhap news agency.

Investigators said the accident came at a point where the ship had to make a turn, and prosecutor Park Jae-eok said investigators were looking at whether the third mate ordered a turn so sharp that it caused the vessel to list.

The sharp turn came between 8:48 a.m. and 8:49 a.m., but it’s not known whether it was done voluntarily or because of some external factor, said Nam Jae-heon, a spokesman for the Maritime Ministry.

Senior prosecutor Yang Jung-jin said earlier that Lee was not on the bridge when the ferry Sewol was passing through an area with many islands clustered closely together. Yang said the law requires the captain to be on the bridge in such situations to help the mate.

Yang said Lee also abandoned people in need of help and rescue, saying “The captain escaped before the passengers.” Video aired by Yonhap showed Lee among the first people to reach the shore by rescue boat.

“I am sorry to the people of South Korea for causing a disturbance and I bow my head in apology to the families of the victims,” Lee told reporters after his arrest, as he left the Mokpo Branch of Gwangju District Court to be jailed.

“I gave instructions on the route, then briefly went to the bedroom when it (the sinking) happened,” he said.

The captain defended his decision to wait before ordering an evacu…….