Home GENERAL NEWS POLITICS People are being threatened left, right and center, some are being attacked... 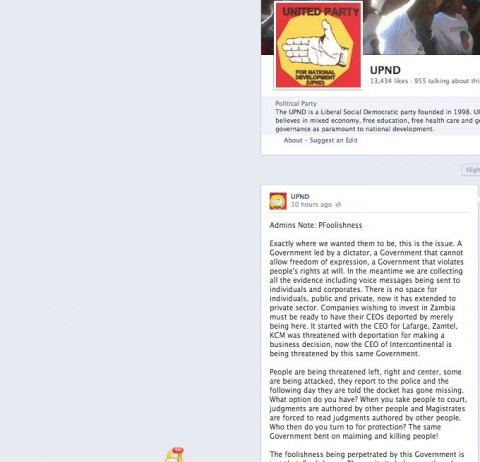 Exactly where we wanted them to be, this is the issue. A Government led by a dictator, a Government that cannot allow freedom of expression, a Government that violates people’s rights at will. In the meantime we are collecting all the evidence including voice messages being sent to individuals and corporates. There is no space for individuals, public and private, now it has extended to private sector. Companies wishing to invest in Zambia must be ready to have their CEOs deported by merely being here. It started with the CEO for Lafarge, Zamtel, KCM was threatened with deportation for making a business decision, now the CEO of Intercontinental is being threatened by this same Government.

People are being threatened left, right and center, some are being attacked, they report to the police and the following day they are told the docket has gone missing. What option do you have? When you take people to court, judgments are authored by other people and Magistrates are forced to read judgments authored by other people. Who then do you turn to for protection? The same Government bent on maiming and killing people!

We as UPND shall not give this nonsense fuel. Sata and his cohorts think we shall retaliate and therefore create a situation that will justify some form of clampdown on opposition. This man thinks he has strategy, we think and know that he doesn’t as a matter of fact Sata’s government is leaking with information at a rate faster than water would leak if filled in a basket. We are always one step ahead of you Michael Sata.

This is a message to our supporters. Sata is a dictator, and he will use all forms of intimidation to try and control you. Don’t fall for that trap. He will also use his violent tactics to entice us to retaliate, we will not fall for that, we know what this scheme is about. UPND members don’t fall for it. Ba Chumbu Munshololwa together with his Chimbwi No Plan (CNP) Government will not manage this team of strategists and thinkers at UPND. Sata might have spent his entire life in politics but does not have the mental ability to strategise the way modern politics operate. 2016 is less than two years from now and PF will not know what would have hit them.