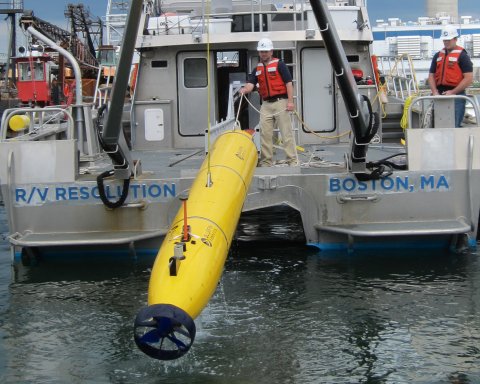 The search area for the missing Malaysian jet has proved too deep for a robotic submarine which was hauled back to the surface of the Indian Ocean less than half way through its first seabed hunt for wreckage and the all-important black boxes, authorities said on Tuesday.

Search crews sent the Bluefin 21 deep into the Indian Ocean on Monday to begin scouring the seabed for the missing Malaysia Airlines Boeing 777 after failing for six days to detect any signals believed to be from its black boxes.

But after only six hours of its planned 16-hour mission on the sea bed, the autonomous underwater vehicle exceeded its maximum depth limit of 15,000 feet and its built-in safety feature returned it to the surface, the search coordination center said in a statement on Tuesday.

What if anything it might have discovered during the six-hour search was still being analyzed, the center said.

The Bluefin 21 will resume the search Tuesday when weather conditions permit, it said.

Search authorities knew that the primary wreckage from Flight MH370 was likely lying at the limit of the Bluefin’s dive capabilities. Deeper diving submersibles have been evaluated, but none is yet available in the search area.

Meanwhile, officials were investigating an oil slick about 3.4 miles from the area where the last underwater sounds were detected, said Angus Houston, the head of a joint agency coordinating the search off Australia’s west coast.

Crews have collected an oil sample and are sending it back to Australia for analysis, a process that will take several days. Houston said it does not appear to be from any of the ships in the area, but cautioned against jumping to conclusions about its source.

The Bluefin 21 can create a three-dimensional sonar map of any debris on the ocean floor.

The search moved below the surface after crews picked up a series of underwater sounds over the past two weeks that were consistent with signals from an aircraft’s black boxes, which record flight data and cockpit conversations. The devices emit “pings” so they can be more easily found, but their batteries only last about a month and are now believed dead.

“Today is day 38 of the search,” Houston told a news conference on Monday. “We haven’t had a single detection in six days, so I guess it’s time to go under water.”

Australian Prime Minister Tony Abbott raised hopes last week when he said authorities were “very confident” the four strong underwater signals that were detected were from the black boxes on Flight 370, which disappeared March 8 during a flight from Kuala Lumpur, Malaysia, to Beijing with 239 people on board, mostly Chinese.

But Houston warned that while the signals are a promising lead, the public needs to be realistic about the challenges facing search crews in the extremely remote, deep patch of ocean – an area he called “new to man.”

“I would caution you against raising hopes that the deployment of the autonomous underwater vehicle will result in the detection of the aircraft wreckage. It may not,” Houston said. “However, this is the best lead we have, and it must be pursued vigorously. Again, I emphasize that this will be a slow and painstaking process.”

Houston, a retired Australian chief air marshal, called the search “one of the largest search and rescue, search and recovery operations that I’ve seen in my lifetime.”

The Ocean Shield had been dragging a U.S. Navy device called a towed pinger locator through the water to listen for any sounds from the black boxes’ beacons.

The Bluefin sub takes six times longer to cover the same area as the ping locator, and the two devices can’t be used at the same time. Crews had been hoping to detect additional signals before sending down the sub, so they could triangulate the source and zero in on where the black boxes may be.

The submarine takes 24 hours to complete each mission: two hours to dive to the bottom, 16 hours to search the seafloor, two hours to return to the surface, and four hours to download the data, Houston said.

The black boxes could contain the key to unraveling the mystery of what happened to Flight 370. Investigators believe the plane went down in the southern Indian Ocean based on a flight path calculated from its contacts with a satellite and an analysis of its speed and fuel capacity. But they still don’t know why.

But Houston said the visual search operation will end in the next two to three days. Officials haven’t found a single piece of debris confirmed to be from the plane, and he said the chances that any would be found have “greatly diminished.”

“We’ve got no visual objects,” he said. “The only thing we have left at this stage is the four transmissions and an oil slick in the same vicinity, so we will investigate those to their conclusion.”

Up to 11 planes and as many ships were to join Tuesday’s search over 24,000 square miles some 1,400 miles northwest of Perth.