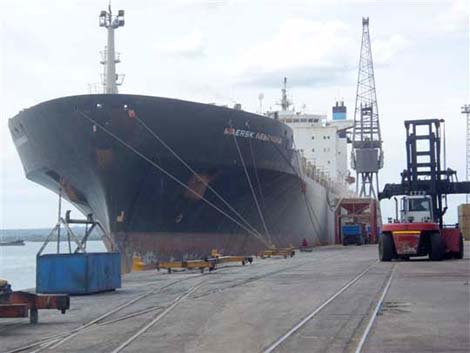 Mr Chivavi says Nacala Port would provide competitive freight rates for the exports and imports as well as a shorter route to overseas markets.

He said this during a familiarization tour of Konkola Copper Mines’ Nchanga mine in Chingola.

This is according to a statement issued by KCM Public Relations Manager, Shapi Shachinda.

Using the Nacala Port would entail transporting copper by road to Chipata before onward transportation on the Chipata-Mchinji railway line to the port via Nacala Railways, which links Malawi and Mozambique.

Mr Chivavi says his government plans to introduce include one month free storage facility and electronic processing for all documentation to promote efficiency at the port.

Konkola Copper Mines General Manager for Marketing and Commercial Somnath Gosh said the company would explore the use of Nacala Port.

Meanwhile, British High Commissioner James Thorton says the Zambian government has a mandate to ensure that mines in the country pay appropriate taxes.

In reference to recent protests against Vedanta resources in the United Kingdom over controversy on tax remittance in Zambia, Mr Thornton says government being a shareholder in KCM has a responsibility of ensuring that the mining giant pays appropriate tax.

He says it is important for mining companies in the country to pay appropriate taxes and declare their production.

Mr Thornton was speaking in an interview with ZNBC in Lusaka.

Last week, some people protested in London, asking the British Government to investigate vedanta for allegedly robbing Zambia of her mineral resources.