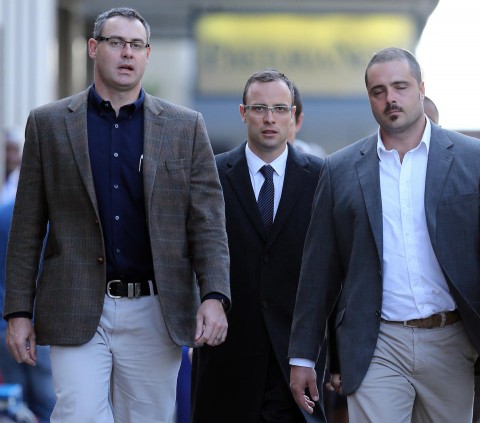 Oscar Pistorius described Tuesday what he said were the terror-filled moments before he shot Reeva Steenkamp to death and removed his prosthetic legs in court during his testimony at his murder trial to show how he stood by the toilet door which he fired into last year.

The actual bullet-riddled toilet door was set up in the courtroom to show how the shooting took place.

Pistorius said that he heard a window open in his bathroom in the early hours of Feb. 14, 2013, causing him to believe intruders had entered his house and to race to get to his gun to defend himself and his girlfriend, who he claims he thought was still in bed.

In a voice quivering with emotion, Pistorius, the world-famous double-amputee athlete, referred to the moment when he said he thought there was a burglar in his home as when “everything changed.”

“I wanted to put myself between the person who gained access to my house and Reeva,” Pistorius said.

While Pistorius claims his fatal shooting of his girlfriend through the toilet door in his bathroom was a tragic accident caused, in part, by his fear of violent crime, prosecutors maintain he killed the model intentionally and his story of a mistaken shooting is an intricate lie.

Before Pistorius’ testimony was interrupted by a lunch adjournment, he had left court to change out of his suit and returned wearing a white long-sleeve t-shirt and shorts, showing his prosthetic legs.

Pistorius claims he was not wearing his prosthetics — and therefore felt more vulnerable — when he shot through the door to kill Steenkamp.

In the courtroom, Pistorius was asked by defense lawyer Barry Roux to stand by the bullet-marked toilet door, which has been in the courtroom as an exhibit for much of the trial, while wearing his prosthetics. Dramatically, Pistorius then sat on a wooden bench and took off his prosthetics and again approached the wood door. It was to show how tall he stood next to it while standing on his stumps next to it.

Pistorius is into his second day of testimony, and was giving an account of what he says are the events in the moments leading up to the shooting that put him on trial for murder. Pistorius was charged with premeditated murder in Steenkamp’s death and faces a life sentence with a minimum of 25 years before parole if convicted on that charge.