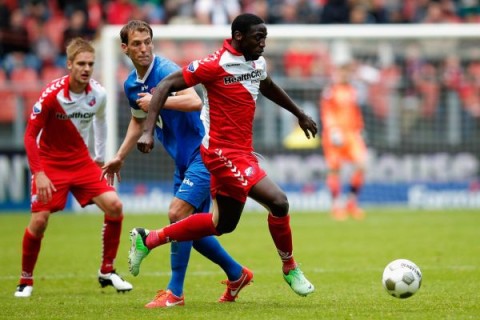 CHIPOLOPOLO coach Patrice Beaumelle has expressed happiness with the performance of the Zambian players in Europe and highlighted the return of striker Jacob Mulenga’s scoring prowess.
Mulenga, whose career has been dogged by injuries, made his second appearance for his Dutch Eredivisie side FC Utrecht and scored to hand his side a 1-0 win.
Speaking at a press briefing at Football House in Lusaka yesterday, Beaumelle said it was exciting to see Mulenga get back on the field and scoring.
“I am thrilled that Mulenga’s latest appearance has produced a goal. It is good when a striker scores. The players in Europe are being monitored and I must mention that I am happy with their performance,” he said.
Last Wednesday, Mulenga scored the only goal in Utrecht’s 1-0 win over Cambuur Leeuwarden in a league match, while defender Stopilla Sunzu has been on song for his Sochaux side scoring four goals.
Beaumelle said players gain confidence when they play regularly for their respective clubs which in turn benefits the national team.
He said he was chatting with Mulenga during the week and encouraged him to keep it up and raise his match fitness and confidence and ultimately enjoy the game.
“He told me that he was very happy and feeling good about the goals.
Back home we are following everybody and we are happy when we see any Zambian boy performing with their club. It brings a lot of good things for the nation and the national team as well,” he said.
He challenged other Europe-based players to continue working hard at their respective clubs and then translate that form to the national team.
Beaumelle, especially encouraged the France-based trio of Sunzu, Nathan Sinkala and Emmanuel Mayuka to remain focused.
“I just want to encourage them. They are contributing to the platform with their clubs and of course when they play regularly they can bring a lot of things to the Chipolopolo,” the Frenchman said.
And Beaumelle said the Chipolopolo will approach the June 6 international friendly against Japan with humility since Zambia had a lot respect for Japan, who are finalists at the 2014 World Cup finalist.
He, however, stated that despite Japan making it to the FIFA 2014 Wold Cup finals, Zambia will approach the game, to be played in Florida, United States of America (USA), without fear.