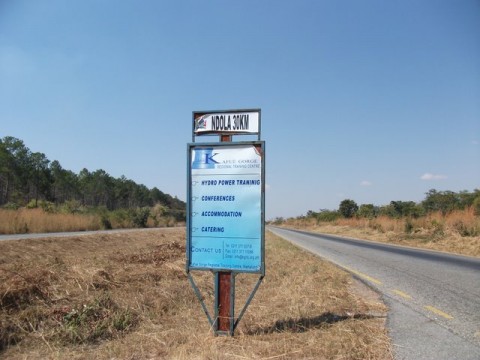 MANY of Africa’s roads are scarred with potholes, so the fresh tarmac on the drive between Ndola and Kitwe, two cities in Zambia’s copper belt, is something of a treat. The country’s roadbuilding is financed by a $750m Eurobond (as dollar bonds issued outside America are known) issued in September 2012. The timing was perfect. The Federal Reserve had an open-ended commitment to buy Treasuries to keep yields low. Investors in America and Europe were hungry to buy dollar-denominated debt offering juicy yields. Zambia drew $12 billion of orders for a ten-year bond paying only 5.4%. Spain could not borrow as cheaply at the time.

Zambia’s debut Eurobond showed how rich-world funds were looking beyond their home territory, past even emerging markets to “frontier markets” at the farthest edge of the investment universe. Even as the prospect of the end of the Fed’s bond-buying caused wobbles in emerging markets last year, African nations were able to tap funds. Nigeria and Ghana sold Eurobonds in July. Mozambique raised $850m in September. Gabon issued a second Eurobond in December.

Frontier markets are generally small, illiquid and risky, so it is a surprise that recent tremors in emerging markets have not shaken them more. Exotix, a broker, calculates an average interest-rate spread of Eurobonds from 50 frontier markets (compared with Treasuries). The spread on its index has narrowed to 395 basis points. The gap between the Exotix measure and J.P. Morgan’s benchmark Emerging-Market Bond Index (EMBI) reached an all-time low of 68 basis points this week (see chart 1). Nor has investors’ interest been confined to bonds. The MSCI frontier equity index lagged behind its emerging-market cousin after the global financial crisis but recently has been catching up

Frontier markets might once have been dismissed as a side bet for emerging-market funds looking to pep up returns. They are now seen as an asset class in their own right, says Andrew Brudenell, who runs $700m of frontier equity funds at HSBC. Pension-fund trustees and consultants now ask how much money they should allocate to the frontier. The rising interest is in part because GDP growth in China, Brazil and India has diminished. The things that made emerging markets exciting in the 1990s are now found in frontier markets, says Charlie Robertson of Renaissance Capital, an investment bank.

There is much debate about where the frontier starts and ends. If the definition is a market that is neither developed nor emerging, then 23 of the 25 fastest-growing economies over the past decade are in the frontier category. But many of these frontier economies do not have stockmarkets and only Qatar is in the MSCI frontier-market

index, an industry benchmark. To qualify, a stockmarket must have at least two stocks that meet specific thresholds for size and liquidity. It must also be “accessible”: this is harder to quantify but what matters is openness to foreign ownership, the ease with which capital can flow across borders and the stockmarket’s functioning. Only 24 markets across eastern Europe, the Middle East, Africa and Asia make the cut. Their combined market capitalisation is $146 billion or so. By comparison the 21 stock markets in MSCI’s emerging-market index are worth $4 trillion.

A familiar grumble about these sorts of indices, which are weighted by the market value of stocks, is that they have a skew that is unfavourable to bargain-hunters. Investors in index trackers spend more on stocks that have gone up in price. It is an acute problem for frontier markets. More than half of the MSCI index is accounted for by stocks from three oil-rich Gulf states: Qatar, the United Arab Emirates and Kuwait (though the first two will soon graduate to emerging-market status).

The purist sort of frontiersman sees the job as investing in poorer countries with the greatest potential. Purists give more room in their portfolios to stocks from poor, populous and fast-growing markets, such as Nigeria or Pakistan. As countries like these become richer, their middle classes will grow and spending on infrastructure will increase. The so-called BBC stocks (banks, brewers and cement companies) are one way to play these investment themes. Zenith Bank, Nigerian Breweries and Dangote Cement are popular stocks. Nestlé has a subsidiary that is listed in Lagos. In Pakistan there is Bank Alfalah and DG Khan, a cement company.

Specialist funds wanting to spread their bets may look at markets and stocks that are not in the main index. Saudi Arabia is a liquid market but tricky for foreigners to invest in. Its stockmarket sports SADAFCO, a dairy producer. Cambodia is another off-index bet. It has Nagacorp, a casino. Often the only way to buy exposure is through bonds. Angola is Africa’s third-biggest economy, after South Africa and Nigeria. It has no stockmarket but it does have a Eurobond. Mozambique’s Eurobond was ostensibly for a state-backed fishing venture. Investors bought it anyway, with one eye on the country’s fast-growing economy and the other on its offshore gas reserves.

Greater demand should spur the supply of stocks, through sales of private stakes or privatisations. Deeper equity markets would be welcome. Access to debt markets is more of a mixed blessing for some. Ghana issued its first Eurobond in 2007. Within a few years its budget deficit blew out to 12% of GDP after a large public-sector pay rise. Mozambique shows worrying signs of similar trouble.

Zambia meant to use its proceeds wisely. The money was to go on targeted projects. New roads in the copperbelt make sense since so much cargo is sent by truck. But easy money leads to lax discipline (see article). The state’s wage bill has become bloated. The budget deficit may be as high as 8% of GDP this year. To help fill the gap, Zambia is said to be plotting another Eurobond.

From the print edition: Finance and economics