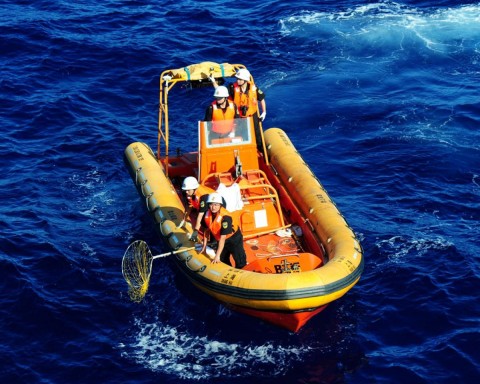 The so-called black box, or automated flight data recorder, was invented by Australian David Warren in 1953 after he had lost his father in a plane crash as a boy.

Sixty years later, in the search for Malaysia Airlines Flight 370, Australia — along with America and China — has taken the lead in the race against time to try and locate the plane’s wreckage somewhere across a stretch of southern Indian Ocean estimated to be an area roughly the size of Poland, about 1,150 miles to the west of Australia.

Flight 370 was last heard from on March 8. Every plane’s black box is fitted with a low frequency acoustic beacon that, when activated after a crash, emits a unique, continuous “ping” for searchers to detect and has a battery life of roughly 30 days (PDF). A host of environmental factors, from depth and temperature of the water to the relative damage done to the equipment, canaffect both the life of the battery and the ease of the search.

That gives the people searching for Flight 370 a little more than a week, perhaps 10 days at most, to not just pinpoint the place where a 240-foot plane went down in a roughly 200,000-square-mile area, but also find it on the ocean floor

The seafloor within the search area is covered in squishy sediment and is generally flat, save for a steep slope and trench near its southern end.

Unless the plane’s fuselage went down the slope or into the trench, the underwater geography should not hinder the search. The area is dominated by Broken Ridge, a plateau where depths range from as shallow as about 2,625 feet to about 9,843 feet.