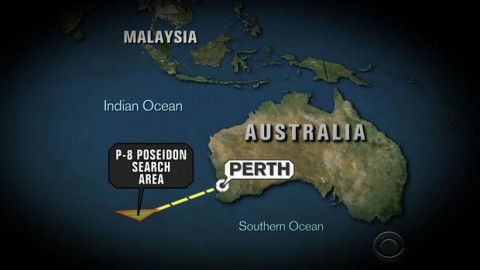 Objects that could be debris from the missingMalaysia Airlines flight have been spotted on satellite imagery and searchers were rushing to locate the objects in the remote south Indian Ocean, the Australian government said Thursday.

Prime Minister Tony Abbott told Parliament in Canberra that a Royal Australian Air Force Orion has been diverted to the area to attempt to locate the objects.

“New and credible information has come to light in relation to the search for Malaysia Airlines Flight MH370 in the southern Indian Ocean,” Abbott said.

He said two objects that may be connected to the missing plane have been spotted on satellite imagery. Abbott said he had spoken with his Malaysian counterpart, Najib Razak.

Abbott cautioned, however, that the task of locating these objects will be extremely difficult and “it may turn out that they are not related to the search for flight MH370.”

John Young of the Australian Maritime Safety Authority told reporters the Orion had arrived in the area and three additional aircraft were following. The search area is about 1,550 miles southwest of the western Australian city of Perth, he said.

“This is a lead, probably the best lead we have right now, but we have to get there and see [the objects] and assess them,” Young said. “I don’t want to speculate on what they are until they have seen them.”

Malaysia Airlines Flight 370 disappeared early on March 8 after taking off from Kuala Lumpur en route to Beijing. There were 329 people on board, including three Americans.

Young could not confirm exactly how many objects had been spotted on the satellite imagery, and he said the images were not very distinct. He said the objects appeared to be the fairly large and that the biggest had been estimated at about 79 feet.


While warning that there was no confirmation that the objects were related to the missing plane, “It is credible enough to divert the research to this area,” Young said.

In the 13 days since the plane disappeared, there has been no sign of wreckage or other definitive sign as to what happened to the missing Boeing 777. The wait has been agonizing for relatives of the passengers and crew.

Young told reporters that if he could talk to the families, he would assure them “that AMSA is doing our level best” to find the plane.

But he warned that it will be some time before the families have even some definitive answers.

“We have to locate it, confirm that it belongs to the aircraft and bring it a long way back to Australia,” he said.