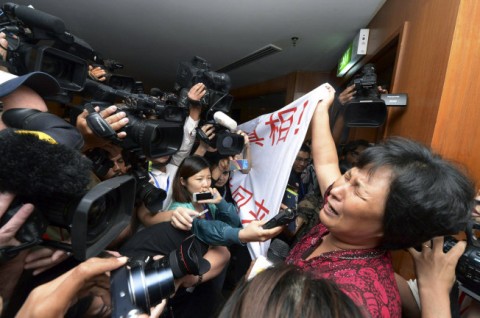 The story of missing Malaysia Airlines flight 370 has been front-page news since its reported disappearance and there’s no sign the media barrage will end soon.

The BBC’s coverage has brought more traffic to its site than any story since the Japanese tsunami. CNN has been criticized for devoting hours of programming to the missing plane and Twitter’s obsession with the news has birthed #MH370 and its fair share of theories. Even celebrity Courtney Love believed she had found the missing plane in satellite images, a story that quickly went viral and generated more coverage for CNN.

The network has seen a huge ratings bump since the plane’s disappearance, growing 86 percent among viewers aged 25 to 54, the Washington Post reports. Fox News pundit Bill O’Reily said of the missing plane coverage, “I know it’s ratings, obviously it’s ratings. People want to watch the mystery, but it’s now corrupting the news business.” O’Reily’s guest and Fox News contributor Charles Krauthammer added, “In the coverage, what annoys me is the way it’s become a game when actually it’s a terrible, terrible event.”

Last week, fellow Fox News colleague and media reporter Howard Kurtz said of CNN’s coverage, “it’s too much with too few facts.” He criticized the news organization for engaging in “all-plane, all-the-time coverage” at the expense of good journalism. “We’re all falling into the trap, I think, of filling airtime with facts, or pseudo-facts, or speculation that turns out not to be true,” Kurtz stated.

Others aren’t convinced that the media’s focus is misplaced. Reuters columnist Jack Shafer writes that while he usually avoids over-coverage, “on a story like MH370, I desire the sort of coverage that could fill the Indian Ocean.” Shafer notes that conflicting reports on fast-moving stories are par for the course, and those who believe otherwise “haven’t been paying close attention to what they have been consuming over the years.”

“The news menu remains immense and varied,” writes Shafer. “If you don’t like the MH370 story, do us a favor and pick something else.”