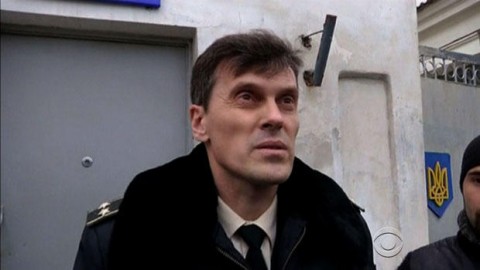 They will vote in Crimea tomorrow on a plan to separate from Ukraine and join Russia instead.

Supporters of the idea are all but claiming victory tonight and outspoken supporters of keeping Crimea “Ukrainian” are disappearing one by one.

The ballots are ready and so are the polling stations.

A team of international observers arrived in the capital this morning, all hand-picked by the pro-Russian government.

So their upbeat assessment comes as no surprise.

“I am going to watch the whole process to see,” said Alexander Simov. “I think that it’s a legal referendum. So I think it is going to be very legal.”

Even if the vote on Sunday looks free and fair, the context is anything but.

Ukrainian soldiers remain blockaded in on their bases. Armed men with dubious authority patrol the streets backed by thousands of Russian soldiers who may be out of sight most of the time but are definitely not out of mind.

Especially after a string of disappearances this week.

Andrei Shchekun is one of them. The head of Crimea’s Ukrainian council, he was arrested last Sunday and hasn’t been seen since.

And there’s Yevgeny Pivovarov, chief of a military hospital in Simferopol, the capital, seen on Monday after 30 paramilitaries had stormed his building.

Then on Friday the armed men came back and arrested the head of the hospital. They accused him of hiding personnel files. He’s been taken him away and nobody knows where he is.

Sergei is the hospital pharmacist. He said he was afraid for Pivovarov’s well-being.

The word is that his life isn’t actually in danger. But just imagine what his family is going through.

As for Sergei’s plans for tomorrow, he says he will not be voting in the referendum. It is a complete farce, he says.