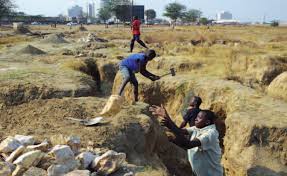 RESIDENTS of Kaniki in Ndola have accused their area MMD councillor Theo Chembe of hijacking a piece of land meant for expansion of a local clinic.
The residents have since passed a vote of no confidence in Mr Chembe for alleged abuse of office.
In a petition to stop construction of a building at the Kaniki/Sakania border turn-off, the residents charge that the councillor had allocated himself a plot which was earlier earmarked for development and extension of the Kaniki clinic.
“The councillor has used his position as councillor to allocate himself a plot at the expense of development of the Kaniki community.
“We feel this is grave abuse of office by the councillor and we wish to pass a vote of no confidence in him as our representative,” said the petition signed by 63 residents and copied to the Times of Zambia.
When contacted for comment, Mr Chembe said he was not aware of the petition against him.
The residents contend that the plot was supposed to be used to extend the clinic to a modern health facility to serve the increasing number of patients from more than six settlements around Kaniki.
Interim committees comprising chairperson Frank Sawana, secretary Wellington Mubanga and six trustees, who are residents, have since been constituted to engage authorities on the matter.
The petition, signed on February 20, 2014, by Mr Sawana and Mr Mubanga, has been delivered to the Anti-Corruption Commission, Ministry of Lands, Copperbelt provincial minister, Ndola District Commissioner, area Member of Parliament, town clerk, and the mayor, among others.
A business structure has reached foundation level at the contested plot after works stalled briefly few months ago following a wrangle between the residents and the developer.
“The residents prefer having a modern hospital and a Food Reserve Agency warehouse to what the councillor is trying to put up. We shall be grateful if our petition is given the quickest hearing,” reads the petition in part.
Ndola Mayor Davies Chiwala confirmed receiving the petition and said a group of planners would be sent to the area to investigate the matter.