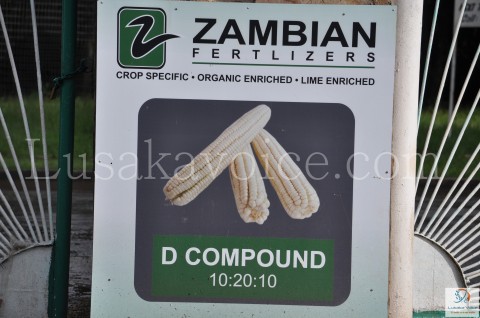 President Michael Sata has disclosed that the Farmer Input Support Programme (FISP) for the 2013/2014 farming season has been steadily progressing across the country.
Mr. Sata said government allocated K499 billion to the FISP in the year 2013 to procure inputs to support 900,000 farmers during the 2013/2014 farming season.
He also disclosed that 659,000 farmers were planned to be supported under the conventional FISP while 241,000 farmers were to be supported through the electronic voucher system in the selected ten pilot districts.
ZANIS reports that the President said this on his facebook site where he was reacting to queries from members of the public on the status of the FISP for the 2013/2014 farming season.
And Mr. Sata has disclosed that the initial quantity of D-Compound fertiliser to be procured for FISP was 70,726.7 metric tonnes from Nitrogen Chemicals of Zambia (NCZ).
He however said this quantity did not include amounts for the selected ten districts that were initially planned to pilot the electronic voucher system.
The President said “as at 19th January 2014, government had distributed 63 per cent of Urea fertilizer to farmers in various parts of the country”.
Mr. Sata however stated that the distribution of imported fertilizers to farmers for the 2013/2014 farming season had some logistical challenges resulting in delays in the delivery exercise.
He reaffirmed government’s commitment to ensuring that the remaining farmers receive their fertiliser as soon as possible.
Meanwhile, Mr. Sata said government’s decision to recapitalise the Nitrogen Chemicals of Zambia (NCZ) was correct and of enormous benefit to the Zambian people.
Mr. Sata said government will continue with the recapitalisation process of the NCZ and investing in the crop diversification programme as well as to restructure the FISP with the aim of providing inputs to all the small scale farmers on time.
In view of the recapitalisation process, NCZ was later awarded a contract to produce and supply an extra 25,599.40 metric tonnes of D-Compound fertilizer in order to cater for the initially left out districts.
As at 16th January 2014, NCZ had produced and delivered a total of 96,328.62 metric tonnes of D-Compound fertiliser representing 100 percent of the contracted quantity.