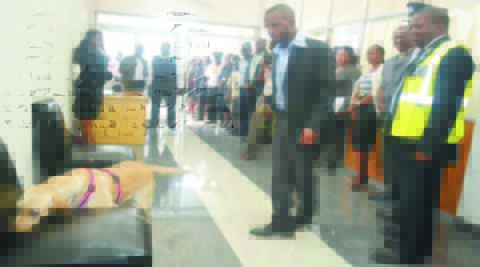 THE Drug Enforcement Commission (DEC) has enhanced its detection of illicit drugs and other illegal items being smuggled in and out of the country following the launch of electronic body scanners Government procured at a cost of K2 million.

The Commission has also acquired sniffer dogs to help in the detection of illegal substances.

Speaking during the launch of the scanners, Dr Simbyakula said Government bought the scanners during the preparations for the United Nations World Tourism Organisation General Assembly which Zambia co-hosted with Zimbabwe in August last year.

“My Government has initiated a vigorous fight against white collar crime and all its offshoots such as illicit drug trafficking, corruption and money laundering.

“The purchase of these scanners bears witness of my Government’s commitment and resolve to combat drug trafficking and organised crime,” he said.

Dr Simbyakula pledged Government’s continued support to the DEC in its fight against organised crime.

“The recent trends in drug trafficking and smuggling of illicit cash may point to the fact that a lot of illicit drugs are entering our country and huge amounts of cash are being smuggled out of the country without being detected,” Dr Simbyakula said.

DEC Commissioner Alita Mbahwe said Zambia had become a transit point and consumer of hard drugs like cocaine and heroin being smuggled into the country through air, water and road transport.

She said the mode of concealing such illicit drugs was becoming more sophisticated and, therefore, required advanced methods of detecting them.