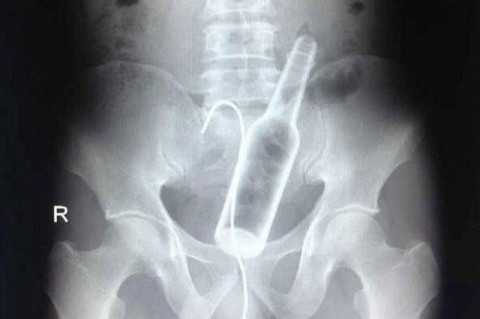 A man who arrived at his local hospital complaining of stomach pains was found to have a bottle lodged deep inside his abdomen and no memory of how it got up there.

X-rays released by the hospital in Fuzhou, China, show both the bottle and the curved wire used by the man in an wildly ill-conceived attempt to retrieve the bottle.

An operation was subsequently performed in order to extract the bottle and sew shut the perforation caused by the wire.

“It reminds me of my residency,” gastroenterologist Dr. Andre Fedida told The Huffington Post. “I once saw a guy with a French’s mustard bottle in his colon.”