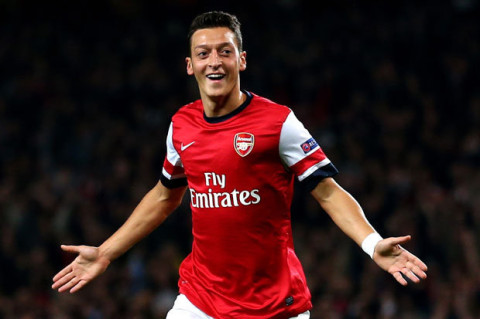 The £42.5m Gunners midfielder picks up a hat-trick of awards in his homeland after fending off Bayern Munich duo Philipp Lahm and Thomas Muller.

Arsenal playmaker Mesut Ozil has been crowned the German Player of the Year for the third season in a row.

Ozil, who became the Gunners’ most expensive player of all time when he signed from Real Madrid for £42m in the summer, fended off competition from Bayern Munich duo Philipp Lahm and Thomas Muller to land the prize.

The 25-year-old picked up nearly 30% of the votes with Bayern captain Lahm finishing as runner-up with 17% to team-mate Muller’s 13%.

Ozil said that he was delighted to scoop the gong in what was a “turbulent” 2013, and also claimed that he sees the award as an “obligation” to win this summer’s World Cup.

He told German FA’s official website: “The 2013 was a very turbulent time for me with my move from Madrid to London.

“The [award] makes me proud and happy, because above all, it was carried out by the fans.

“The award for me, is an obligation to have a successful 2014 World Cup. I still play every international game as though it is my first.”