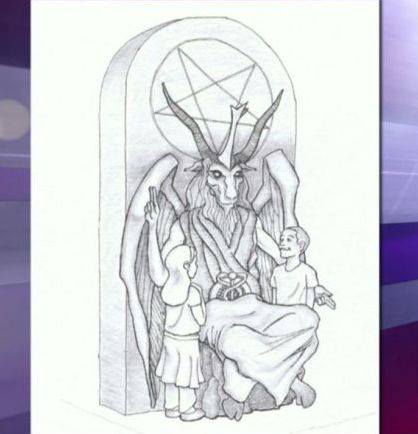 A New York-based satanic group has unveiled designs for a demonic statue, which they hope to build next to a Ten Commandments monument at the Oklahoma Capitol.The Satanic Temple’s proposed design features a demon on a throne with smiling kids surrounding it.

Rabbi Shmuley Boteach, American Atheists President David Silverman and Catholic League President Bill Donahue had a heated panel discussion yesterday on The Real Story.“My religion, Christianity, is about love. This is about evil, OK? They don’t deny it,” Donahue said.

Silverman argued in favor of the statue because he said that “the religious freedom in this country guarantees equality.”

“This is a democracy,” Boteach fired back. “How many people are Satanists versus believers in God?”

The New York-based Satanic Temple formally submitted its application to a panel that oversees the Capitol grounds, including an artist’s rendering that depicts Satan as Baphomet, a goat-headed figure with horns, wings and a long beard that’s often used as a symbol of the occult. In the rendering, Satan is sitting in a pentagram-adorned throne with smiling children next to him.

“The monument has been designed to reflect the views of Satanists in Oklahoma City and beyond,” temple spokesman Lucien Greaves said in a statement. “The statue will also have a functional purpose as a chair where people of all ages may sit on the lap of Satan for inspiration and contemplation.”