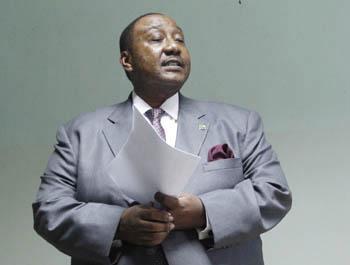 The United Party for National Development (UPND) has observed that the continued unwarranted verbal attacks on former Defence Minister Geoffrey Mwamba following his resignation are unwarranted.

UPND deputy Spokesperson Edwin Lifwekelo notes that such attacks could be a ploy by a cartel of alleged desperate individuals in the ruling Patriotic Front (PF) to have Mr Mwamba expelled from the party.

In statement issued to Qfm,Mr Lifwekelo has also advised those seeking jobs in PF administration to stop using Mr. Mwamba’s resignation as a platform to secure favours from the President Michael Sata.

Mr.Lifwekelo says such people should take a deep reflection and soul searching as to whether their attacks on the Kasama central Member of Parliament are genuine or mere cosmetic.

Mr. Lifwekelo adds that Dr. Chishimba during the same press briefing described President Sata as a dictator and likened him the likes of Idi Amin of Uganda, Adolf Hitler of Germany and the Soviet Union’s Joseph Stalin.

Mr. Lifwekelo says this is why it is hypocritical for Dr. Chishimba to make a different statement about President today now that he is Head of State.