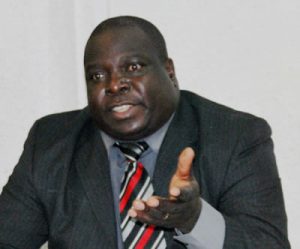 PATRIOTIC Front (PF) national youth chairperson Chishimba Kambwili has warned that Luanshya Central member of Parliament (MP) Steven Chungu  and two  district officials risk being expelled from the party for alleged indiscipline.
But Mr Chungu said he is not moved by Mr Kambwili’s threat to expel him and vowed to remain loyal to President Sata.
Speaking when he addressed PF Luanshya district, constituency and ward officials on Sunday, Mr Kambwili alleged that Mr Chungu, who is also PF Luanshya district chairman, his deputy Patrick Maipambe and vice publicity secretary Charles Mulenga will be expelled from the party for allegedly causing confusion.
Mr Kambwili, who is Minister of Youth and Sport, also warned members not to fall prey to the alleged confusion among PF leaders in Luanshya or risk being “sieved” from the PF.
“We are doing politics differently and not like in the MMD, we have to respect the grass roots. President Sata has told us to respect the grass roots. I am warning defectors not to bring confusion in PF,” Mr Kambwili said in apparent reference to Mr Chungu, who defected from the MMD to join PF in 2007.
“I am warning Mr Maipambe, Chungu and Mulenga that they have to stop causing problems or they will be expelled,” Mr Kambwili said.
He reminded members to remain loyal to President Sata.
But Mr Chungu said he is guided by the principles of the PF which entail loyalty to President Sata.
“My being quiet for a long time is not a sign of weakness; it is a sign of maturity. I am not in competition with him [Mr Kambwili], I am just fulfilling my campaign promises to the people of Luanshya Central. He thought I would be his tail. I refuse to be intimidated and because I refused, he accuses me of causing disunity in the party,” Mr Chungu said.
He added: “I have no reason to cause disunity. I have just refused to support his presidential ambitions.”
Mr Chungu alleged that Mr Kambwili has been telling people that President Sata has endorsed him to take over the leadership of the party when he steps aside at the end of his term of office.