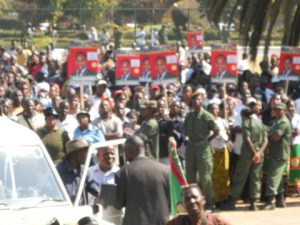 United Party for National Development (UPND) Batoka ward councillor, Mackson Simwami,  has resigned  from the party with scores of other opposition members to join the ruling patriotic.

MMD district treasurer Timothy Siakaziba also resigned and joined the PF together with other MMD and UPND members.

Welcoming the defectors Mr Munkombwe who is  provincial PF chairman said the PF is gaining control of the Southern Province which has been an opposition stronghold.

Mr. Munkombwe says the mass defection to the ruling party is testimony that people are happy with the unprecedented levels of development being implemented by the Patriotic Front Government in the Southern province.

And Mr. Simwami says he has decided to leave the opposition UPND because it is offers no hope to Zambians.

But UPND Spokesperson, Cornelius Mweetwa has told ZNBC that the party is not shaken by the defection of the Mr Simwami.