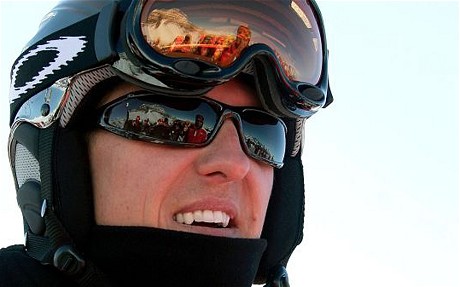 Michael Schumacher’s family has provided French investigators with the helmet camera that the Formula One great wore during a skiing incident in which he was critically injured, his manager said Saturday.

Schumacher’s condition remains critical but stable, manager Sabine Kehm wrote in an e-mail Saturday. He has been in a medically induced coma since Sunday, when he fell while skiing and struck his head on a rock.

Kehm also sought to play down media speculation about Schumacher’s health, and requested respect for the family’s privacy. Citing consultations with Schumacher’s doctors, she said no press conferences were expected before Monday.

Schumacher’s wife, Corinna, his father Rolf and brother Ralf together with family doctor Gerard Saillant and the FIA President visited the hospital in southeastern Grenoble on Saturday.

The German driver and his family typically celebrate Christmas, New Year and his birthday at their ski house in the French resort of Meribel, where the accident happened.