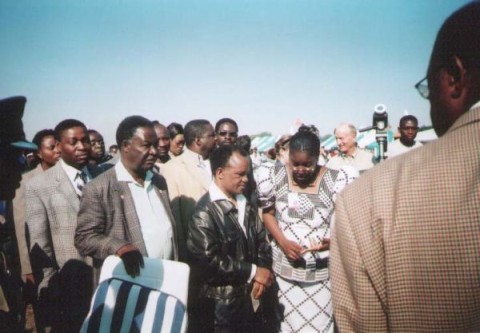 THE Republican Progressive Party has launched a society in honour of the late former Republican President Frederick Chiluba.

The society is aimed at highlighting and appreciating the positive contributions Dr Chiluba made to Zambia.

He said there would be a seven-day match past starting from January 6 next year in remembrance of Dr Chiluba.

Mr Lukuku said at a Press briefing in Lusaka yesterday that President Chiluba declared Zambia a Christian Nation, allowed free market trade and a free transport system in the country.

“There was a lot that the former President did to empower the ordinary Zambians such as him declaring the country a Christian nation as a way of inculcating Christian values and cardinal virtues in the leadership sphere of the country.

“He opened up the Zambian market for foreign commodities. Today the country boasts of a free transport system which is all the work of the former president’s leadership,” he said.

Mr Lukuku said the society would establish a school of leadership philosophy and human development, as well as a department for championing and fostering democracy across Africa.

He said the society, which is being funded by friends and people who supported the philosophies of the late president, would also establish a Christian bureau to promote Christianity.

He said there would also be a department of private intelligence, diplomacy and international economics.

Mr Lukuku said there was need for the country to have political decency and continue respecting former presidents when they left power.

Party secretary Leslie Chikuse said the party was ready to take part in all by-elections in the country.

Mr Chikuse said the party leadership was confident of performing well in the by-elections and declared intentions to contest the Vubwi, Mkushi South, Malambo and Solwezi Central parliamentary seats which have all been nullified by the courts of law for electoral malpractices.