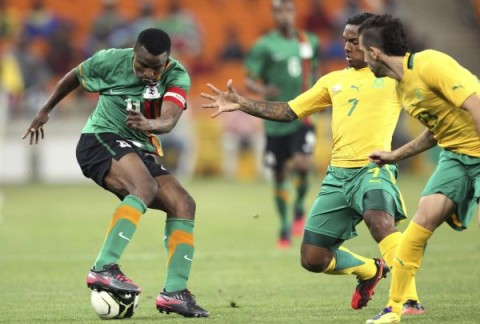 Tweet
GOVERNMENT has set up an inter-ministerial committee to spearhead Zambia’s preparations for the possible staging of the 2019 Africa Cup of Nations (AFCON) finals.

Sports Minister Chishimba Kambwili said the steering committee would drive Zambia’s preparations and look at all logistical requirements for the successful hosting of the AFCON tournament.

Kambwili said in an interview yesterday that the committee which also includes a representative from the Football Association of Zambia (FAZ) would be chaired by Sports Permanent Secretary, Agnes Musunga.

He said Government was determined to ensure Zambia won the bid to host Africa’s premier football showpiece in 2019. Kambwili said FAZ had also set up its own steering team for the AFCON preparations.

The minister said it was through concerted efforts from Government, FAZ and the entire football fraternity which would see the nation win the right to organise the 2019 continental championship.

On other preparatory programmes, Kambwili said Government had identified some stadiums in the country which would be used as training pitches for the AFCON finalists and also some other facilities which would be upgraded to international standards.

He said Government also remained committed to building two more modern stadiums in Mongu and Livingstone, adding on to the elegant Levy Mwanawasa in Ndola and the Heroes National Stadium in Lusaka.

The Confederation of African Football (CAF) is expected to send some inspectors to Zambia to check on some facilities, which include hotels and training grounds, next year in April.

Zambia presented its bid to host the 2019 AFCON tournament on November 25 at the CAF headquarters in Cairo, Egypt. FAZ president, Kalusha Bwalya described the move to lodge the bid as the proud moment for Zambia and thanked Republican President, Michael Sata and Government for the support.

“It’s a very proud moment for all of us at Football House and we believe that our candidature to bring home the Africa Cup will be a success.

“Through the vision of our Government and in particular the support of his Excellency President Michael Sata, we are able to proudly declare that Zambia is ready and willing to put on Africa’s showpiece event with new stadiums and infrastructure development.

“We have indicated in our bid to CAF that we as a nation are united in this endeavour and together we believe we can be the best hosts Africa has to offer in 2019,” Kalusha said.

Zambia is in the race for the 2019 AFCON together with Ivory Coast, DR Congo, Gabon, Guinea and Algeria. In September this year, CAF granted Zambia the right to host the 2017 Under-20 African Youth Championship.