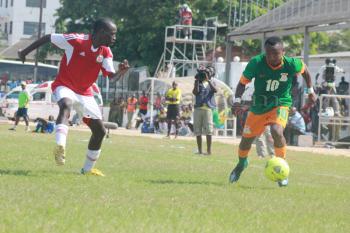 The 2013 CECAFA Guest team, the Zambian Chipolopolo have progressed to the semi-finals of the 38th tourney in a nail biting fashion following a 4-3 dramatic post penalty victory over the Burundian Swallows in a match played under intense heat at the Mombasa Municipal Stadium in Kenya.

Following a goal-less first half, the 2 teams continued to play hide and seek with minimal attacks to either goal area and by the 70th minute, the match surely looked destined for a draw as both teams did less goal bound threats.

And indeed, it ended a draw, as the result called for immediate dispatch of the FIFA Post match penalties. In the shoot out, the Zambians took an early lead courtesy of veteran Felix Katongo’s wonderful strike. Misses teammates, Alex Ngonga and Kabaso Chongo did not deter his side from victory as Burundi missed a series of their own through Rashid Harerimana, Issa Hakizimana and Mossi Moussa.

The victory grants the 2010 African champions, a slot to the 2013 semi-finals and will await the winner between Sudan and the Ethiopian Walya Antelopes.