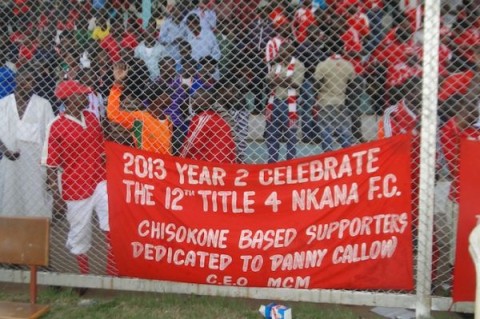 BLADES 1 NKANA 0 (abandoned, 84th minute)
IRATE Nkana and Konkola Blades fans yesterday turned Chililabombwe’s Konkola Stadium into a boxing arena as they exchanged punches that caused the abandonment of the MTN Super Division Week 27 match.
The fight, which started in the 84th minute in the terraces, forced referee Wisdom Chewe to halt play for over 10 minutes but efforts by police officers to restore order proved futile.
When the situation became tense, Chewe called off the match claiming there was inadequate security as fans outnumbered police officers.
When the match was abandoned, Nkana were trailing 1-0.
Humphrey Maseneko fired Blades into the lead in the 13th minute through a penalty after an infringement on Lazarus Kambole by defender Masautso Zimba.
Maseneko had a chance to double the lead on 26 minutes but blasted his close range shot wide after benefiting from Kambole’s cross.
In the 28th minute, Blades coach Beston Chambeshi, a former Nkana trainer, had his game plan disturbed when Brian Chewe was injured.
Nkana, who struggled to find their rhythm, could have equalised in the 56th minute but Festus Mbewe’s header missed the target by a whisker.
With time running out, Nkana coach Masautso Mwale introduced Lottie Nyimbili for Jimmy Ndhlovu on 64 minutes.
His counterpart Chambeshi also withdrew skipper Robert Tembo for Peter Zulu as Nkana pushed for an equaliser with midfielder Kelvin Mubanga’s 83rd minute free kick missing the target by an inch.
Nkana remain on 54 points, seven better than second-placed Zesco United and Nchanga Rangers.
ROAN 2 KALULUSHI 2
In an early kick-off at the same venue, substitute Joseph Bwalya came off the bench to rescue relegation-threatened Kalalushi Modern Stars from defeat to Roan United as the teams shared spoils in a tightly-contested Week 27 encounter.
Bwalya, who replaced Mike Katiba in the 56th minute, cancelled Roan’s lead in stoppage time pouncing on a loose ball in the crowded box.
Kalulushi opened the floodgates in the sixth minute through Shadreck Musonda’s penalty.
Katiba was hacked by striker-cum-defender Ben Mwanza and referee Wellington Kaoma pointed to the spot.
Roan hit back on 26 minutes through Lyson Sikaonga.
Sikaonga took things personal when he dribbled a forest of defenders before unleashing a scorcher past goalkeeper Lennon Muma.
After the break, Roan brought in Bwalya for Katiba and later introduced Eddie Sinyangwe for injured Aubrey Chamulwanda.
Kalulushi coach Dick Ngwenya also rested Josephat Kasusu for William Chinse on 72 minutes but it was Perry Sinkala who shook the net on 76 minutes after heading in Kabwe Chileshe’s free kick.
Kalulushi did not sit back as Bwalya restored parity with a clinical finish.
Roan have moved to 35 points while Kalulushi are still lying in the relation zone with 21 points.